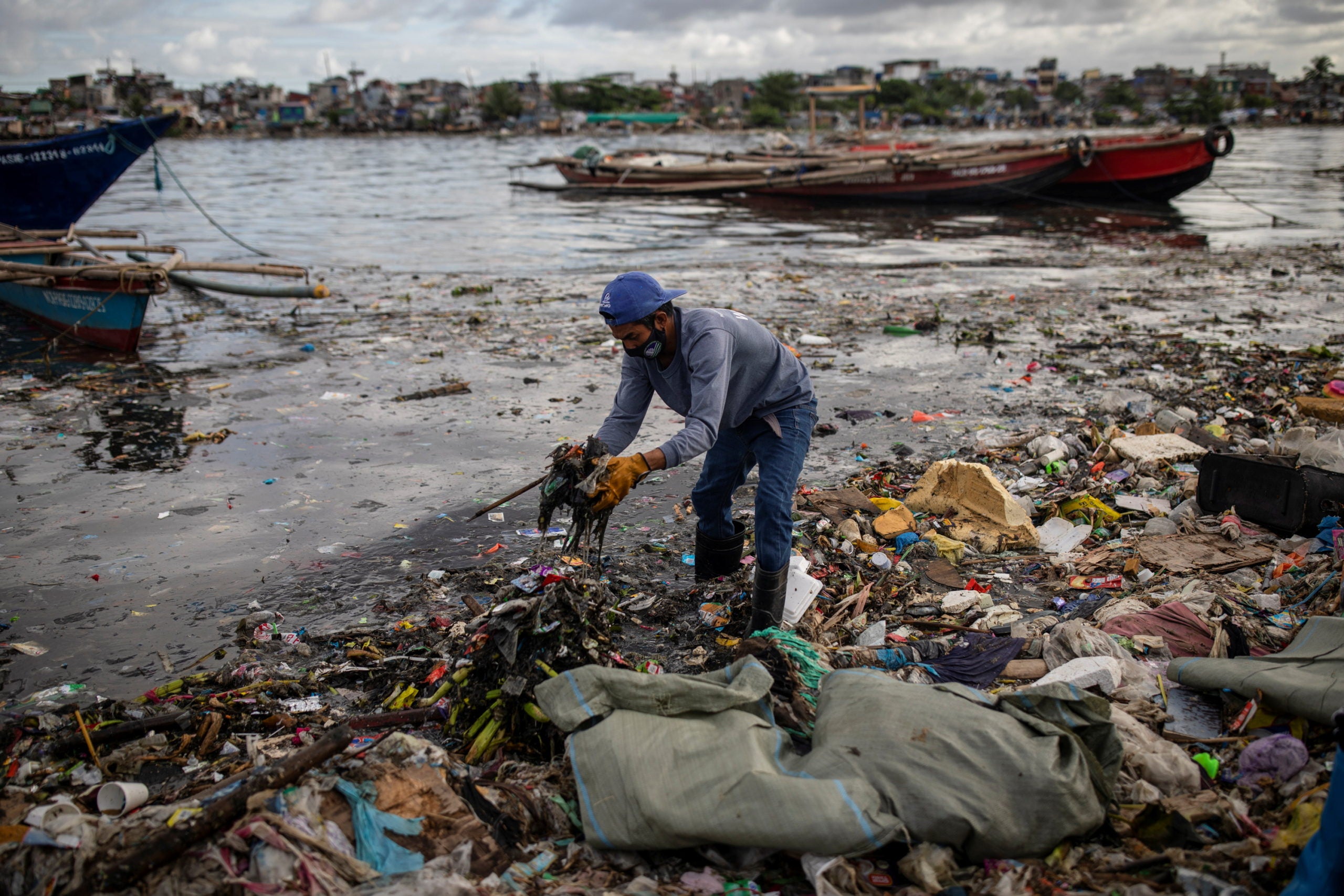 CLOGGED WATERWAY Argie Aguirre, a member of the River Warriors, gathers trash from the Pasig River, in Baseco, Manila, on June 22. —REUTERS

MANILA, Philippines — Each morning, a group of Filipinos rakes up piles of trash on the banks of one of the world’s most polluted rivers, filling sacks in an endless pursuit to clean a waterway that is also a major source of ocean plastics.

These “river warriors” are a decade-old group of about 100 people who work to clear the glut of garbage floating or washed up along Manila’s notorious Pasig River.

The 27-kilometer river cutting through the Philippine capital was once a vital trade route. But urbanization and poor sewage planning have left the river all but dead.

The warriors started off as volunteers but now receive a basic income from a local government and operate in small groups at different parts of the river.

Dexter Opiana, another river warrior with six years of service, said he and about 19 others work shifts of about seven hours and collect an average of 80 to 100 sacks a day, more during monsoon season.

Most of the trash are plastic wrappers, single-use sachets and packaging materials. Since the pandemic began, surgical face masks are sometimes mixed in among the other floating garbage.

A 2021 report by Oxford University’s Our World in Data estimated 81 percent of global ocean plastic comes from Asian rivers and the Philippines alone contributes a third of that total.

Pasig River alone provides up to 6.43 percent of ocean plastic originating from rivers, the report said.

Despite the warriors’ Sisyphean task, they are optimistic of better days ahead.

“This has been our advocacy, to have the river cleaned for the sake of our children, our parents, our nation and Mother Nature,” Imperio said.

Joan Lagunda, assistant secretary at the Department of Environment and Natural Resources, said authorities were coordinating with local governments to establish proper waste segregation practices and want informal settlers on the riverbanks to be moved.

Marian Ledesma, a campaigner with Greenpeace Philippines, said the government should reduce single-use plastics and strengthen law enforcement on waste disposal and sewage.

“I’ve seen it done in other cities, in other countries, so I don’t think it’s impossible to revive and clean up Pasig River,” she said. “It will need a collective action.”

Read Next
Poe urges PhilHealth to settle unpaid claims of hospitals
EDITORS' PICK
97% of COVID-19 beds at PGH currently occupied
Gear up and get ready to play with Yamaha Mio Gear
Acer starts the year off strong with the Aspire Vero National Geographic Edition
Japan brings back virus restrictions over Omicron surge
Over 3 Million worth of prizes to be won at Smart Padala’s SENDali Manalo Promo!
Uproar over no vax, no ride policy: Maybe it’s time for gov’t to say sorry—Bello
MOST READ
1Sambayan names 7 aspirants in its 2022 Senate lineup
Emma Stone calls Andrew Garfield a ‘jerk’ after he ‘lied’ about his ‘Spider-Man: No Way Home’ appearance
Guevarra to Acosta: Obey rules on unvaccinated
PH to import 60,000 tons of fish to cover shortage
Don't miss out on the latest news and information.