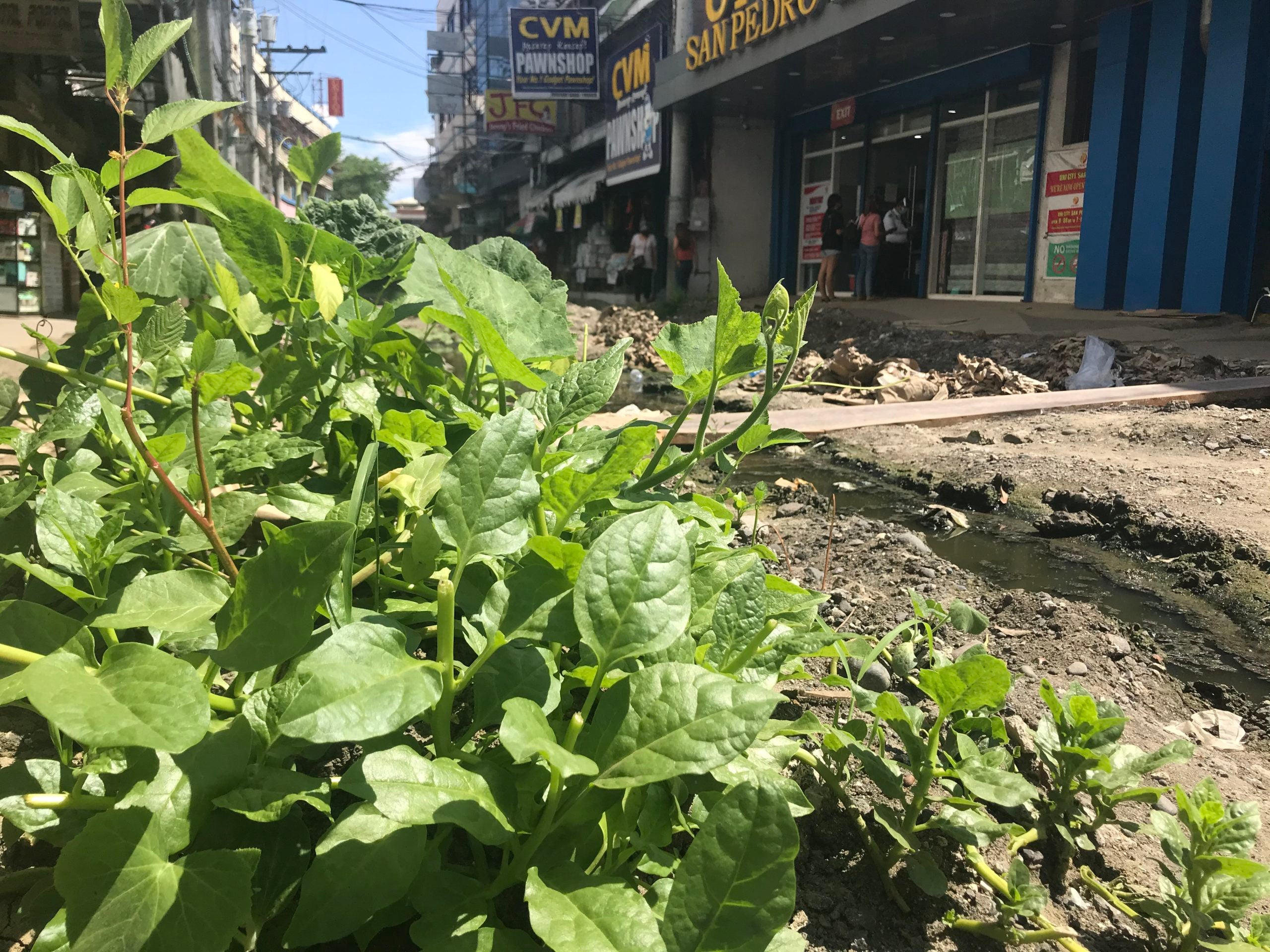 VIRTUAL SWAMPLAND ‘Alugbati’ and squash are growing in what used to be a busy street in Davao City that turned into a virtual swampland after it was dug out in April by the Department of Public Works and Highways for a road concreting project. —GERMELINA LACORTE

DAVAO CITY — What used to be a crowded street bustling with vendors, shoppers and passersby here has turned into a swampland where some alugbati (Malabar spinach) and squash are now growing after the Department of Public Works and Highways (DPWH) started digging Ponciano Reyes Extension, known here as the Crooked Road.

Work started in April this year but in the last two months, when the road project failed to move, some people in a nearby eatery stuck some stems of alugbati and threw in some discarded seeds of squash on the mounds of dug up earth, even as the craters in between them collected water from the rains, a security guard from a nearby store said.

Crooked Road, a name carried from way back to the first settlers here, used to be the drop-off point of crowds milling from the nearby City Hall and San Pedro Street because of the row of stores selling cheap gadgets, groceries and used clothes, and an assortment of food stalls.

But since the digging started, this short stretch of road that connects Rizal Street to San Pedro Street, has been closed to jeepneys and cars.

Now that the alugbati stems have been profusely leafing and the squash has started to sprout and creep from the ground, store owners in the area are asking when will the road be fixed and finally be opened again.

Even Mayor Sara Duterte expressed exasperation over the street digging, which she said was not only happening on Crooked Road but also in other downtown streets.

“It’s a DPWH project,” Duterte told the Inquirer in a text message. “The mayhem in the downtown streets, that’s their doing. Those center islands (being constructed) in the middle of small roads, those are DPWH (projects). The blockage in the shared bike lane, that’s their project, too. Only the stars know the mind of the DPWH,” she said.

Dean Ortiz, information officer and spokesperson for the DPWH, however, said the project on Crooked Road was part of the P27.1-million pavement concreting project that covered the entire stretch of Ponciano Reyes, Bangoy and Jacinto extension streets leading to the Marco Polo Hotel, Aldevinco Shopping Center, going to the Madrazo Fruit Stand to the Central Bank area and up to F. Torres Street.

“For the longest time, we’ve been using asphalt on our roads. These are city roads we are talking about, we have to ensure that our roads are in good condition. Unlike asphalt, which every now and then needed to be retouched and maintained, concrete is more durable and long-lasting,” he said.

The project started in December last year and would have been completed in May but the onset of heavy rains in the last two months caused the delay.

“The project was already 91.94-percent complete, but as soon as we reached Crooked Road—the junction from Rizal to San Pedro Street—we suffered major delay because of the incessant rains,” he said.

“It’s critical consideration in concreting that the base should be dry and stable; so, we had to wait for the weather to improve,” he said to explain why the work needed to stop. “We need good weather to proceed with concreting.”

He added, however, that the weather had started to improve and expressed confidence that the project would finally be completed. INQ