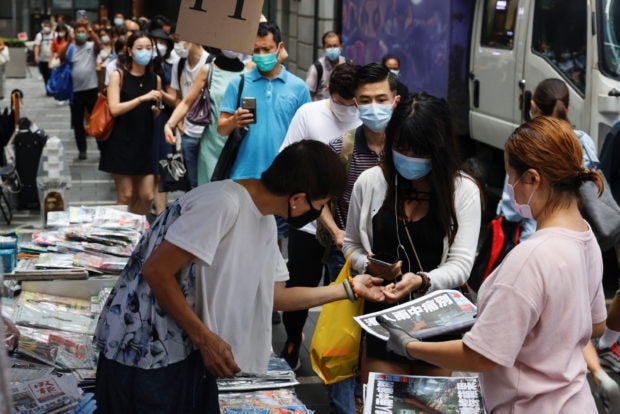 People queue to buy copies of the final edition of Apple Daily, published by Next Digital, in the Central financial district, in Hong Kong, China June 24, 2021. REUTERS/Tyrone Siu

HONG KONG — U.S. President Joe Biden on Thursday called the closure of Hong Kong’s Apple Daily tabloid a “sad day for media freedom” and said it signaled “intensifying repression” by China, while vowing to maintain support for the people of the Chinese-ruled territory.

In a statement following the news outlet’s closure earlier on Thursday, Biden called on Beijing to stop targeting the independent press and release detained journalists and media executives.

“People in Hong Kong have the right to freedom of the press. Instead, Beijing is denying basic liberties and assaulting Hong Kong’s autonomy and democratic institutions and processes, inconsistent with its international obligations,” he said.

Apple Daily was forced to end a 26-year run amid a national security crackdown that froze the company’s funds. Its closure prompted snaking lines of hundreds of loyal readers at newsstands across the city.

“It is a sad day for media freedom in Hong Kong and around the world,” Biden said, adding that the publication had been “a much-needed bastion of independent journalism in Hong Kong.”

“Through arrests, threats, and forcing through a National Security Law that penalizes free speech, Beijing has insisted on wielding its power to suppress independent media and silence dissenting views,” he said.

Biden vowed that the United States “will not waver in our support of people in Hong Kong and all those who stand up for the basic freedoms all people deserve.”

The shutdown deals the most serious blow yet to Hong Kong’s media freedoms and could potentially destroy the city’s reputation as a media hub after Beijing imposed the security law on the financial center last year, media advocacy groups say.

Speaking to the 2021 Society of Publishers in Asia press awards ceremony held in Hong Kong, Bachelet said the national security law was leading journalists to “self-censor” to avoid clashing with “vaguely formulated offenses.”

Lai has been in jail since December over unauthorized rallies during Hong Kong’s mass pro-democracy protests in 2019. He is facing three national security charges, including colluding with a foreign country and is already serving several sentences for taking part in unauthorized rallies.

Britain’s foreign minister Dominic Raab called on China to respect its commitments to free media under an agreement with Britain over how Hong Kong would be ruled after its return from British rule to China in 1997.

“We certainly view what’s been happening in with the closure of the Apple Daily and the arrest of journalists very, very seriously,” he said. “We call on China to respect the terms that it freely signed up to and we think that’s a matter of trust as well as important for the people of Hong Kong.”

Apple Daily was an unapologetic tabloid that mixed pro-democracy discourse with celebrity gossip and investigations of those in power. It had been a thorn in Beijing’s side.

Last year, before Biden won the U.S. presidential election, it published two articles on his son Hunter Biden and his ties to a Taiwanese businessman who the paper said was a purported broker “enabling Hunter Biden’s deals in mainland China over a decade”.

Lai said on Twitter in October he personally had “nothing to do with” a report on Hunter Biden’s alleged China business links, but admitted funds from his private firm and had been used to fund it.

In anticipation of robust demand for its final print run, The Apple Daily printed 1 million copies, or more than 10 times its usual.

Emotions ran high on Thursday among supporters of the paper, which has faced an unrelenting squeeze since Lai’s arrest in August 2020.

“I couldn’t sleep well for the past few nights,” said Tse, 60, a former medical worker, who leaned on a cart to support herself as she queued for a paper. “I hope reporters can stay true to their faith and keep working hard.”

“(After) today, there is no press freedom in Hong Kong,” said Dickson Ng, 51, a designer at the paper. “I feel very disappointed and angry.”

Five executives were arrested, and two – chief editor Ryan Law and Cheung Kim-hung – were charged with conspiracy to commit collusion with a foreign country and denied bail. On Wednesday, a columnist for the paper was also arrested under the national security law.

Officials in Hong Kong and China have repeatedly said media freedoms are respected but are not absolute.

“Hong Kong is a society that has rule of law. … No one or no organization is above the law,” a spokesperson for China’s foreign ministry said. “All rights and freedom, including media freedom, cannot go beyond the bottom line of national security.”