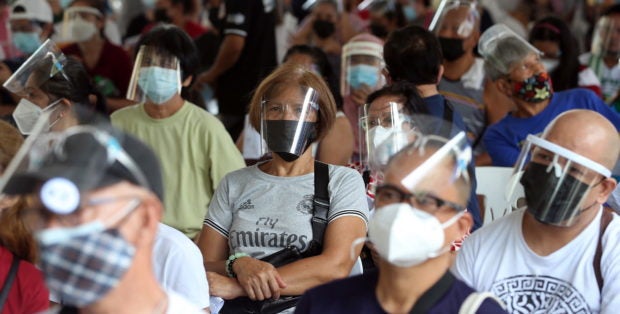 MANILA, Philippines — Who’s the “genius” that convinced President Rodrigo Duterte to backtrack on his earlier ruling that face shields should be worn only in hospitals? Senate President Vicente Sotto III wants to know.

Sotto pointed out on Wednesday that the Philippines is the only country in the world whose citizens use both face masks and shields to protect themselves from the virus that causes COVID-19, and sent reporters a copy of the Department of Health (DOH) brief to that effect.

Mr. Duterte said on Monday that face shields remained a must, when days earlier he told senators at a meeting that shields were good only in hospitals. He reversed himself on the “advice of health experts,” his spokesperson Harry Roque said.

So Sotto asked: “Who was the genius that persuaded the government?”

He added: “It’s confirmed. Even the brief sent by DOH proves no [other] country in the world mandates the use of face shields on top of face masks. It’s either/or in most countries. Other countries, mask only!”

But microbiologist Dr. Karl Henson backed Malacañang’s retention of the use of face shields, along with other protocols, to limit the entry and spread of the highly transmissible Delta variant.

Speaking at the Laging Handa briefing on Wednesday, Henson named the other protocols as mass vaccination and strict border control, among others.

Asked if there could be certain business people pushing face shields for profit, Sotto said it was possible.

“People cannot help but suspect something is wrong somewhere,” he said.

Per the DOH brief:

• Malta uses either masks or visors or shields.

• The state of Oregon in the United States uses masks or face coverings or shields.

• The United Kingdom requires the use of shields only for staff who work in close contact with the public, such as hairdressers, barbers, beauticians, studio artists and studio photographers.

“The lack of vaccines is what prolongs this debate on face shields. We’ve been told to endure the inconvenience of face shields until we reach herd immunity,” Villanueva said in a statement.

He suggested that the government limit the use of face shields to those in constant exposure to the coronavirus.

Echoing Sotto, Villanueva said: “Other countries recommend face mask or face shield, not both. We should do the same. Why inconvenience the public when there is really no added value in terms of protection?”

Sen. Risa Hontiveros said the use of face shields should be “optional.”

Sotto III also wants the Senate committee of the whole to investigate the efficacy of face shields in preventing COVID-19 transmission.

In Senate Resolution No. 757, Sotto cited the position of the US Centers for Disease Control and Prevention that face shields “are not as effective at protecting you or the people around you from respiratory droplets,” and should be used only as an alternative for people unable to wear a mask.

“[F]or the marginalized and the poor, a face shield is very costly [and does not offer] protection against the virus. Our people should invest in a proper mask that is scientifically proven to protect them from the virus,” he said.

Commenting on the controversy, Henson, an officer of the Philippine Society for Microbiology and Infectious Diseases, cited data showing that the use of face shields increased protection against COVID-19.

“We have available data on that; the sample population is not that big, but we have [data],” he said.

Henson said he used to be skeptical of the effectiveness of face shields but changed his mind when the COVID-19 variants emerged.

“In the face of the Delta variant … on our doorstep [that] is much more transmissible, I think we need to employ all the protection we can get to avoid community transmission… We don’t want [to happen to us] what India experienced earlier this year,” he said.

Henson said the Delta variant, owing to additional mutations on its genetic material, had been found to adhere to cells in human airways, making it more transmissible.

“But the important thing is, those infected by the Delta variant have somewhat different symptoms—reportedly no coughing symptoms, no loss of taste. … So it’s more likely for the patient to ignore symptoms, especially if they are very mild,” he said.

Citing findings in the United Kingdom, Henson said it had not been established if the Delta variant was deadlier than others. However, he said, those afflicted were more likely to need hospitalization.

As to the finding that more younger people are getting infected by the variant, this may be because most of them go out of the house or are not vaccinated, compared to the elderly who stay indoors or have been inoculated, he said.

Henson said his personal view was that the more people got vaccinated, the better would be the protection against the variant.

Apart from vaccination, the government and the community should enforce and comply with health protocols and standards such as proper ventilation, wearing of face masks and shields, hand hygiene and physical distancing, he said.