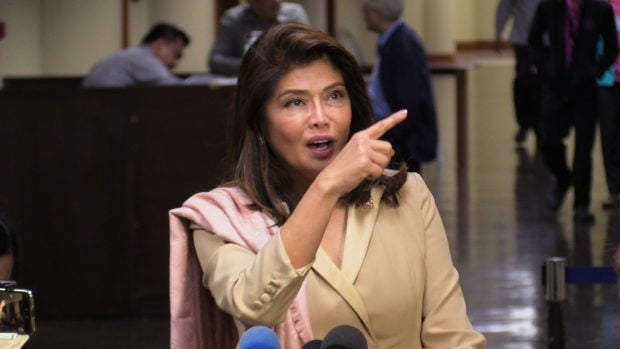 MANILA, Philippines— Senator Imee Marcos called on the Filipino legal community on Wednesday to “resist”  any attempt by the International Criminal Court (ICC) “to take over cases of alleged human rights abuses in the Duterte government’s war on drugs.”

“Foreign meddling in the Duterte case is not far-fetched,” Marcos said in a statement. “It would be an insult to every Filipino lawyer, judge and court if the ICC presumes to stand in their place, even before cases linked to the drug war undergo [the] due process in our very own judicial system.”

Before retiring last week, ICC Prosecutor Fatou Bensouda churned out a 57-page report requesting judicial authorization to investigate what she considered crimes against humanity committed in the Philippines.

However, Marcos warned that the ICC might engage in “foreign meddling” by investigating President Rodrigo Duterte for waging a deadly war on drugs, expressing concern about how its funding is conducted and who the judges will be.

“The court is largely European-funded at a time it is short on funding, and has so far decided mostly on cases involving Africans. Less economically and politically powerful nations are at a disadvantage,” she said.

Furthermore, she highlighted AEI’s observation that, even if the United States is not a state party to the Rome Statute establishing the ICC, it could exert pressure on nations that it continues to defend militarily.

“It is interesting to note that before she retired last week, former Chief Prosecutor (Fatou) Bensouda pushed to investigate President Duterte at the heels of his announcement that the suspension of the Visiting Forces Agreement (VFA) would be extended,”   Marcos said.

“Human rights issues will be deployed in pursuit of military goals,” she further said.

Marcos also claimed that vote trading and political favors among state parties have been “an open secret” when selecting ICC judges.

As Japan ratified the Rome Statute in 2007 and became the ICC’s top donor, she said, it was rewarded with the selection of Fumiko Saiga, despite her relatively inexperienced status as a judge.

“Even her replacement after she died was a Japanese diplomat with no experience as a lawyer nor a judge,” Marcos pointed out.

In her request for an investigation into Duterte’s case,  Bensouda said information the prosecution obtained “suggests that state actors, primarily members of the Philippine security forces, killed thousands of suspected drug users and other civilians during official law enforcement operations.”

“Markedly similar crimes were committed outside official police operations, reportedly by so-called ‘vigilantes’, although information suggests that some vigilantes were in fact police officers, while others were private citizens recruited, coordinated, and paid by police to kill civilians,” she said.