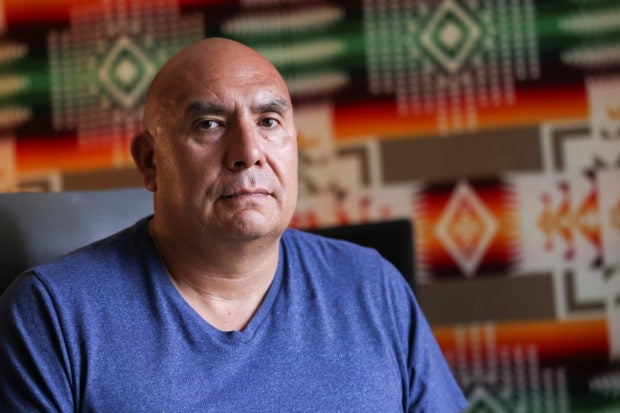 Clarence Smith, who attended both Chemawa Indian School in Oregon and the Flandreau Indian School in South Dakota, poses for a portrait at his home in Thornton, Colorado, U.S., June 18, 2021. REUTERS

Clarence Smith was fresh off a 24-hour bus trip from his Blackfeet reservation in Montana to the Flandreau Indian School in South Dakota in the late 1980s, where he was sent by his family in the hope he would receive a better education.

“On one of the first days of class, a white social studies teacher stood before our class and told us that we were lucky Columbus had found us, because otherwise we would still be living in teepees,” Smith said.

He gazed down at the pair of LA Lakers sneakers he got just for his new school. If it weren’t for Columbus, he would still be in moccasins, he recalls thinking. Many years would pass before Smith began reeducating himself, as he puts it – of finding his own history.

Flandreau, which declined comment, is one of at least 73 Native American schools out of an original 367 still in operation across the United States, according to researchers at the National Native American Boarding School Healing Coalition.

One academic researcher contends that as many as 40,000 children may have died in or because of their poor care at the U.S.-run schools, but the federal government does not know or is unwilling to say how many children even attended the schools, how many died in or went missing from them, or even how many schools existed.

As a congresswoman representing New Mexico, Deb Haaland was among those who called for a commission to fully investigate the legacy of Indian boarding schools. On Tuesday in her new position as U.S. Interior Secretary, Haaland announced that her department would investigate the schools and their lasting impact on the lives of Native Americans.

The investigation will focus on children who died while attending the schools and on finding their unmarked graves. The department will gather as complete a record as possible on the schools, where they were located and who attended them.

“I know that this process will be painful and won’t undo the heartbreak and loss that so many of us feel,” Haaland said in remarks to the National Congress of American Indians. “But only by acknowledging the past can we work toward a future that we’re all proud to embrace.”

Haaland is the first Native American to serve as a Cabinet secretary. The Interior Department oversees Indian schools, which churches began running in 1819 through federal funding.

Conditions at former Indian schools gained global attention last month when tribal leaders in Canada announced the discovery of the unmarked graves of 215 children at the site of a former residential school for indigenous children.

The Canadian government said its indigenous residential schools, the last of which closed in 1996, carried out “cultural genocide.” Canada’s Truth and Reconciliation Commission has found at least 4,100 students died in the schools.

Flandreau, which is still operating, was founded in 1892. At the time the ethos of such schools was expressed by U.S. Civil War veteran General Richard Pratt, who founded the Carlisle Indian Industrial School in Pennsylvania in 1879 and said: “Kill the Indian, save the man.”

“It’s a little bit annoying that so many people are shocked by that news” from Canada, McCleave said. “We’ve been trying to tell people about this for years.”

Preston McBride, a Dartmouth College scholar, has documented at least 1,000 deaths at just four of the over 500 schools that existed in the United States, including the non-boarding schools on Indian reservations. His research has examined deaths from 1879 to 1934.

The deaths were primarily from diseases made far more lethal in many of the schools because of poor treatment. The actual number of deaths is thought to be much higher.

“It’s quite likely that 40,000 children died either in or because of these institutions,” said McBride, who estimates that tens of thousands more children were simply never again in contact with their families or their tribes after being sent off to the schools.

“This is on the order of magnitude of something like the Trail of Tears,” McBride said, referring to the government’s forced displacement of Native Americans between 1830 and 1850. “Yet it’s not talked about.”

Marsha Small, a Montana State University doctoral student, uses ground-penetrating radar to locate unmarked graves, including at the Chemawa Indian School cemetery in Salem, Oregon. The cemetery was left in disarray after original stone markers were leveled in 1960. So far she’s found 222 sets of remains but says much more work is required to have a full accounting.

Chemawa, founded in 1880, is still operating.

Native Americans acknowledge that the schools still operating have changed in important ways. Many are now under tribal oversight and children are taught their home languages instead of being punished for speaking them. But the schools have yet to acknowledge their pasts, said the coalition’s McCleave and others.

“Before we can move forward, they have to recognize that legacy,” she said.

Aurelio Morrillo, a 2020 Chemawa graduate who was raised for several years on the Gila River reservation in Arizona, said that while there he was never taught about the school’s past.

“I feel like something is being hidden that we still don’t know about,” he said.