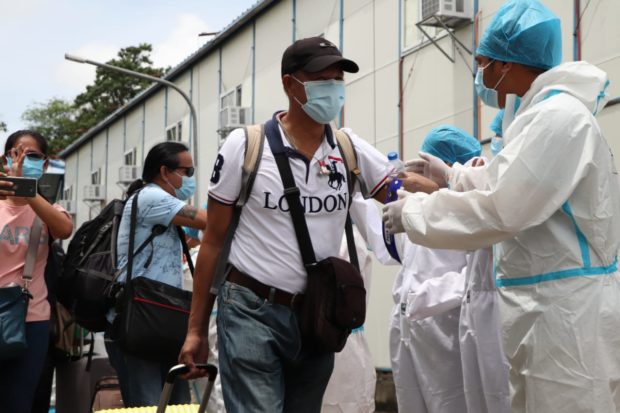 MANILA, Philippines — President Rodrigo Duterte said on Monday that he would want the still unused funds allocated under Bayanihan laws to pay for the quarantine expenses of Filipinos returning from abroad.

In his weekly taped public address, Duterte it was the least the government could do to ease the inconvenience of being quarantined, a mandatory measure to block the entry of more infectious COVID-19 variants, such as the more transmissible Delta variant.

Under government protocols, returning Filipinos are required to undergo a 10-day quarantine on arrival.

“Congress appropriated so much money for Bayanihan. I think that if there is residual there, it behooves upon the government to pay for the sequestration expenses of every returning Filipino,” Duterte said, speaking partly in Filipino.

“That’s why Congress gave us a big amount of money, and I think — I read it in a newspaper now — that about P10 billion — yes, billions remain not utilized,” he added.

He said the money should be allocated to pay for the lodging expenses of returning Filipinos, adding that the Department of Social Welfare and Development or the Department of the Interior and Local Government could “take care of that.”

He said even local government units should facilitate the lodgings of returning Filipinos in quarantine facilities.

“I am ordering now everybody, including the government units, put them in a hotel or whatever, and the national government will pay for it,” Duterte said.

In May, Duterte allocated another P5 billion for the repatriation and mandatory quarantine of overseas Filipino workers.