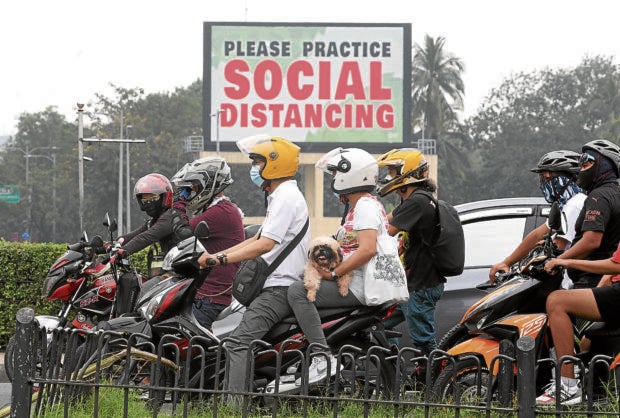 On the other hand, there was a decrease in the number of violators of the ban on mass gatherings and the mandatory wearing of face masks, according to records of the Department of the Interior and Local Government (DILG).

Año reported that 15,590 individuals were caught violating physical distancing, over 11,000 of whom were warned, 2,000 were fined, 420 were given community service, while 1,400 face charges.

Meanwhile, the DILG recorded 49,526 violators of the face mask requirement , although Año said this number actually was lower than what was recorded a week before.

The DILG  also logged 426 mass gathering violators, 357 of whom were warned and 69 were fined.

“In all, we filed cases against 2,230 for not wearing face masks and no physical distancing,” Año said.

The DILG is also monitoring the progress of the cases of those attending mass gatherings or super-spreader events, but it recorded no superspreader events from June 14 to June 20.

“This is a good sign that many are following the president’s orders to intensify the maintenance of order and monitor the compliance of health and safety protocols,” Año said in Filipino.

“But we are still monitoring reports of violators of physical distancing and the ban on mass gatherings,” he added.

Over 2,200 persons arrested from June 6 to 13 for violating health rules