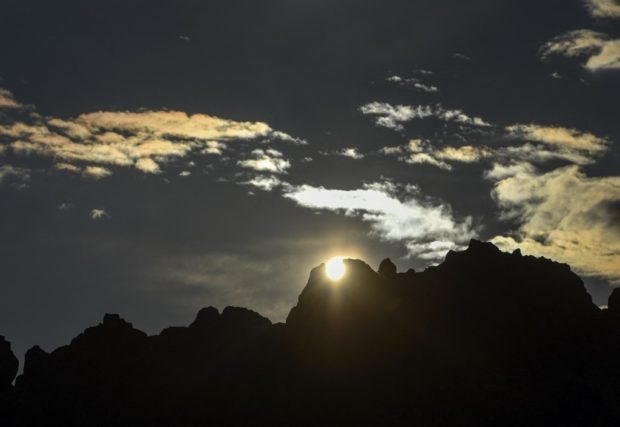 The sun rises from a rocky crest filled with astronomical stone markers at the ancient megalithic observatory of Kokino, soon after sunrise, early morning on June 21, 2020 – the day of the summer solstice in Skopje, the capital of the Republic of Macedonia. The site is ranked by NASA as the fourth ancient observatory in the world (Photo by Robert ATANASOVSKI / AFP)

MANILA, Philippines — The country will experience its longest daytime and shortest night during the summer solstice on Monday, according to the Philippine Atmospheric, Geophysical, and Astronomical Services Administration (Pagasa).

Based on the astronomical diary of Pagasa, “Philippine nights are at their shortest and daytimes are at their longest during the summer solstice, which falls on June 21 at 11:32 A.M.”

“This is the time when the Sun attains its greatest declination of +23.5 degrees and passes directly overhead at noon for all observers at latitude 23.5 degrees North, which is known as the Tropic of Cancer,” the state weather bureau said.

Pagasa said this event marks the start of the apparent southward movement of the Sun in the ecliptic.

The country, meanwhile, will experience winter solstice in December, where it records its shortest day and longest night of the year.