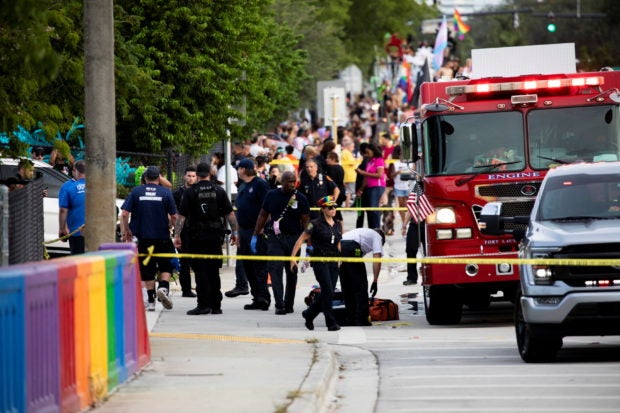 Police and firefighters respond after a truck drove into a crowd of people during The Stonewall Pride Parade and Street Festival in Wilton Manors, Florida, U.S. June 19, 2021. REUTERS

The driver of a pickup truck that hit two pedestrians at the start of a gay pride parade in Fort Lauderdale, Florida, was a 77-year-old participant in the event, police said on Sunday.

The driver, who has not been identified by local authorities, is cooperating fully with investigators, showed no signs of impairment and has not been charged, Fort Lauderdale police said in a written statement.

The victims, both adult males and members of the Fort Lauderdale Gay Men’s Chorus, were rushed to Broward Health Medical Center, where one of the victims was pronounced dead. The second victim was listed in a serious condition.

The driver is also a member of the Gay Men’s Chorus.

“The driver of the vehicle, a 77 year-old male, was a participant who had ailments preventing him from walking the duration of the parade and was selected to drive as the lead vehicle,” police said.

The incident remains under investigation.

Fort Lauderdale Mayor Dean Trantalis, who was criticized after initially telling a local television station that the incident was premeditated and a “terrorist attack on the LGBT community,” appeared to walk back those statements on Twitter.

“I was eyewitness to the horrifying events … I feared it could be intentional based on what I saw from mere feet away,” Trantalis said on Twitter.

“As the facts continue to be pieced together, a picture is emerging of an accident in which a truck careened out of control,” he said.

Democratic Representative Debbie Wasserman Schultz, who was in the parade, tweeted that she was safe, though she was “deeply shaken and devastated that a life was lost and others seriously injured.”