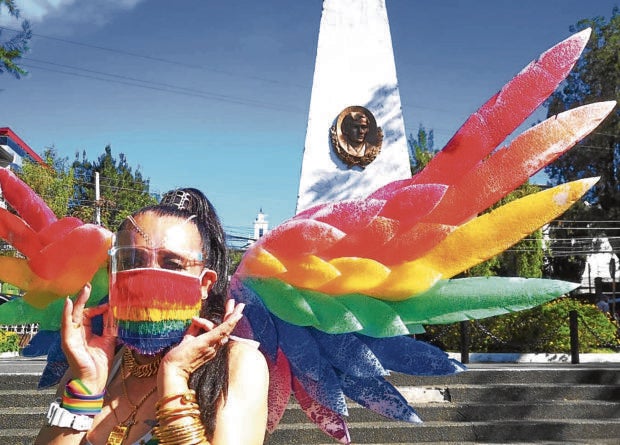 REVOLUTIONARY At 71, Baguio’s Butch Yabut has been fighting for LGBTQ rights for decades. During the celebration of Pride Month staged on Saturday, Jose Rizal’s birthday, he came in drag at a pedestrian lane that was converted into a “Rainbow Crosswalk” linking Rizal Park and Burnham Park. —EV ESPIRITU

BAGUIO CITY, Benguet, Philippines — The pedestrian lane in front of Baguio’s Rizal Park was repainted last week with all the colors of the rainbow, in time for the celebration of a different kind of freedom on Saturday, the 160th birthday of national hero Jose Rizal.

The multicolored crosswalk expressed the continuing fight for LGBTQ rights, and serves as an homage to the summer capital, which was made the safest city for the queer community because of its antidiscrimination ordinance, Albert Sotelo said.

Ordinance No. 13, passed in 2017, penalizes any individual who harasses, ridicules or threatens people because of their sexual orientation and gender identity, their ethnicity, or their religion. Offenders are fined up to P5,000 or meted a jail term of one day to a month.

Sotelo, who runs a bed and breakfast establishment with his American husband Kevin, said over 4,000 LGBTQ and their supporters lived in the mountain city, 80 percent of whom are students who came home because of the coronavirus pandemic.

Sotelo said Baguio’s LGBT protection law to Congress would be brought by advocates, who hoped to see the city’s example replicated throughout the country.

“We need this to be a national law protecting the LGBTQ,” said Sotelo, a Filipino who lived in the United States before he and Kevin relocated to Baguio in 2014.

“There are far more important issues for the LGBTQ in the Philippines, like youth suicides, homelessness, the absence of transgender rights, employment discrimination and HIV-AIDS care,” he said, “[but] I believe that once lawmakers recognize and understand that we deserve equality, we will be better equipped to [vote for laws that solve these problems].”

The 58-year-old man said younger LGBTQ had been too absorbed by fears of discrimination and rejection, and might not understand why he was crusading for laws providing the LGBTQ equal access to social service programs, civil and military benefits, employment benefits, or economic and trade rights.

“Boring right? [But] if I contracted COVID-19 and my health declined to a point where I would need intubation, I would certainly want my husband to make end-of-life decisions on my behalf. Without marriage equality, the hospital would be asking for next of kin … If I die, my estate does not automatically transfer to my husband.”

Sotelo said he married Kevin in 2010 in Washington, D.C., “firstly because we love each other but also in furtherance of activism.”

But their marriage, while recognized in 29 countries, is not legally binding in the Philippines and “that is not OK,” he said.

“As we stand here at Rizal Park under the shadow of Dr. Jose Rizal, let him bear witness that we believe in fighting for our rights,” he said in a speech when the LGBTQ walkway was launched.

Less than 30 participants were at the crossway because of COVID-19 restrictions on gatherings.

A couple of women arrived after biking all the way from Quezon City. Despite his age, another participant, 71-year-old Butch Yabut, joined the event in drag, strapped with angel wings.

“Let this rainbow crosswalk be a reminder that I, together with your help, will continue to fight for our equal rights. I encourage you to learn about our gay history … keep the fight going,” Sotelo said.