Man sets world record for most push-ups in a year after tallying over 1.5 million | Inquirer News
Close
menu
search

Man sets world record for most push-ups in a year after tallying over 1.5 million 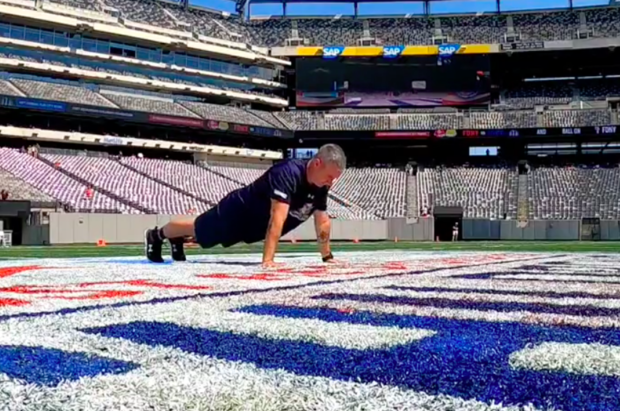 A 46-year-old dad in Wisconsin in the United States earlier this month set the world record for the most push-ups done in a year.

Nate Carroll pulled off the amazing feat after tallying over a whopping 1.5 million push-ups in order to raise money for Tunnel to the Towers Foundation’s Fallen First Responder program, which helps support children left behind by fallen police officers and firefighters.

“Thank you Tunnel to Towers for supporting the families of our fallen first responders. Helping these families means more to me than any amount of #pushups completed. That being said, I’m grateful to have passed this record with my children watching and in the presents of the brave men and women of the NYPD and FDNY,” he posted on Instagram on June 7.

The said post also came with a video of Carroll doing some of the last push-ups needed to set the set record, which totaled 1,500,231 push-ups.

Carrol started the yearlong journey of breaking the 31-year-old record on Flag Day, June 14, last year. He earlier told the Wisconsin State Journal that he averaged 4,000 push-ups per day to achieve the record.

“Averaging over 4,000 pushups a day certainly develop muscle in the arms and core. However, what was most noticed was my awareness of how my body felt and responded to the stress of thousands of pushups each day,” Carroll was quoted as saying on June 7.

He then noted that the “most dramatic change was… mental strength and the understanding that the body is a phenomenal creation, and if properly cared for and conditioned, can endure significant physical stress and accomplish tremendous feats.”

He did it both to raise money for charity and to “demonstrate to my kids what goals that seem impossible look like when they are broken down into daily manageable chunks,” he said in his FOX News interview then.

In his latest Instagram post, made on June 14, Carroll said he was “so thankful for the opportunity to help” the said foundation.

“The push through challenge was one example of how to help those who serve. May you look for opportunities to support those who serve our nation and your community. Remember, it costs nothing to say thank you,” he said.

“And, I’d encourage you to contribute 11 dollars a month to The Tunnel to Towers Foundation. There is a current waitlist of over 100 families the foundation is committed to helping. Thank you all!” Carroll added.

Carrol, a social worker, was able to achieve the world record while also doing his day job as well as being a father to three children. Ian Biong /ra