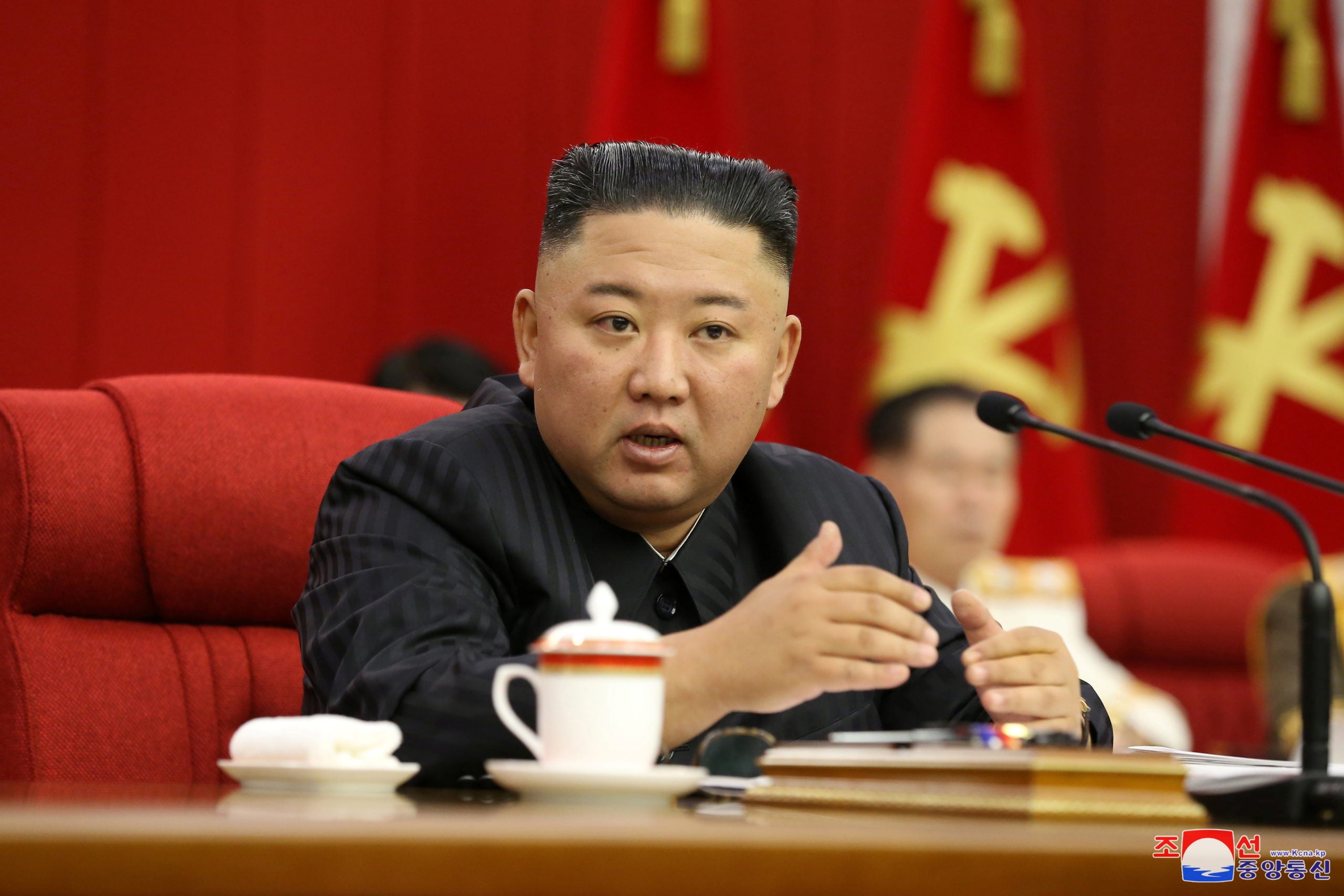 North Korean leader Kim Jong Un speaks during the third-day sitting of the 3rd Plenary Meeting of 8th Central Committee of the Workers’ Party of Korea in Pyongyang, North Korea in this image released June 17, 2021, by the country’s Korean Central News Agency. KCNA via REUTERS

SEOUL — North Korean leader Kim Jong Un said the country should prepare for both dialogue and confrontation with the United States, particularly confrontation, state media KCNA reported on Friday, in his first direct comment on the administration of U.S. President Joe Biden.

Kim gave a detailed analysis of the Biden administration’s North Korea policy at a plenary meeting of the ruling Workers’ Party’s central committee on Thursday, and laid out “appropriate strategic and tactical counteraction” to deal with Washington, KCNA said.

“The General Secretary stressed the need to get prepared for both dialogue and confrontation, especially to get fully prepared for confrontation in order to protect the dignity of our state and its interests for independent development.”

Such moves would “reliably guarantee the peaceful environment and the security of our state,” KCNA said. Kim also emphasized the need to create a “favorable external climate” for the North’s own initiatives.

The report did not provide details of any course of action.

Kim’s remarks came two days before the newly appointed U.S. envoy for North Korea, Sung Kim, is scheduled to arrive in South Korea on his first visit since assuming the role last month.

He will hold talks with South Korean and Japanese counterparts and meet other Seoul officials during his stay until June 23, the State Department said on Thursday.

Kim’s comments continue a “wait and see” policy while refraining from provoking the Biden administration, said Vipin Narang, a nuclear affairs expert at the Massachusetts Institute of Technology in the United States.

“It seems to suggest that Pyongyang thinks the ball is in the U.S. court at the moment, and it is waiting to see how the Biden administration outreach goes,” he said. “Given reports of North Korea’s food and COVID-19 situation, one presumes that Kim is also happy to avoid a near-term confrontation.”

Yang Moo-jin, a professor at the University of North Korean Studies in Seoul, said Kim appeared to be sending a message to Washington that he would be willing to return to talks at some point.

“Despite mentioning confrontation, he refrained from criticizing both the South and the United States while highlighting the need to maintain a stable geopolitical situation,” Yang said.

Biden and South Korean President Moon Jae-in held their first summit in May, injecting fresh urgency into efforts to bring the North back to denuclearisation negotiations.

North Korea lashed out at the United States and its allies in South Korea last month in a series of statements saying comments from Washington on its North Korean policy were proof of a hostile policy that required a corresponding response from Pyongyang.

North Korea’s plenary meeting kicked off on Tuesday to review progress on major policies and devise steps to resolve pending issues. On its first day, Kim called for measures to tackle the “tense” food situation, blaming the coronavirus pandemic and last year’s typhoons.

Diplomats and analysts say the North is experiencing widespread food shortages after typhoons destroyed crops last year, while there are concerns COVID-19 may have taken hold in the country despite no official acknowledgment by Kim’s regime. Border closures have further hit an economy already battered by international sanctions.