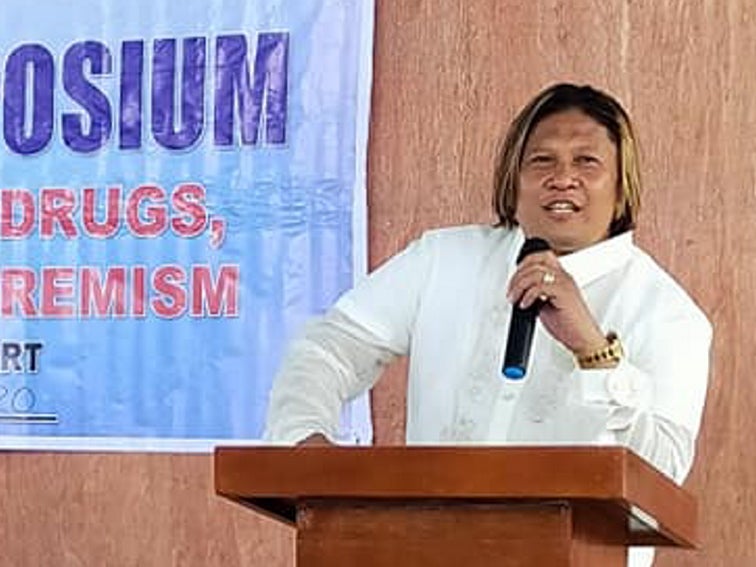 MANILA, Philippines — One of the alleged planners of the bombing in President Duterte’s hometown of Davao City in 2016 which left at least 14 people dead was killed early on Thursday as he tried to grab a gun from one of the officers who arrested him the previous night, Philippine National Police Chief Guillermo Eleazar said.

Former Mayor Montasir Sabal of Talitay town (Sultan Sumagka) in Maguindanao, who suffered a gunshot wound, died on the way to a San Juan City hospital where he was taken, the PNP said.

Sabal, 44, and his younger brother, the late Abdul Wahab “Allan” Sabal, were included in the “narcolist” read publicly by President Duterte in August 2016.

Both denied involvement in illicit drugs, although Sabal had admitted in media interviews that he was engaged in the trade before entering politics.

Sabal was arrested at the Batangas City port on Wednesday night along with three women (Norayda Nandang, 43; Aika de Asis, 34; and Ailyn Compania, 45) and three men (Zuharto Monico, 28; Muhaliden Mukaram, 36; and Wilson Santos, 41).They were rounded up by operatives of the PNP Criminal Investigation and Detection Group (CIDG) while boarding a roll-on, roll off vessel bound for the Visayas around 7 p.m.

Eleazar said Sabal was in a car with CIDG operatives on their way to Camp Crame early Thursday morning. When they were somewhere along N. Domingo Street in San Juan City the former mayor allegedly tried to escape, grabbing the gun of one of the officers.

The CIDG operative grappled with Sabal for possession of the weapon which went off at least twice, one bullet hitting the officer and the other hitting the ex-mayor.

The policeman who was wearing a bulletproof vest was unhurt. Sabal was taken to San Juan City Medical Center where he was declared dead on arrival around 6 a.m.

In September 2016, the vice mayor was arrested at the Cotabato City airport after a search of his vehicle yielded several firearms, about 72 grams of shabu and a 60-mm mortar shell fashioned into an improvised bomb.

The explosive device resembled the one that exploded at the Roxas Avenue night market in Davao City about two weeks earlier on Sept. 2. Because of this, he was investigated for possible links to the Davao bombers.

He was not convicted of any criminal case, allowing him to remain in office and run for mayor in 2019. He was gunned down outside a hotel in Manila in February last year, catapulting Sabal back to his position as mayor.

Last March, Sabal’s followers and relatives clashed with members of another clan in Talitay, sending some 700 families fleeing from their homes. He later declared a state of calamity because of the prolonged displacement.

He resigned as mayor last month, supposedly to ease tensions in the town.

Eleazar said Sabal was a logistics supplier for the Bangsamoro Islamic Freedom Fighters (BIFF) and was identified as one of the planners of the Davao City bombing, which also wounded scores of others barely two months after Mr. Duterte took office as president.

The information about Sabal came from police investigation and intelligence gathered by the military, Eleazar said.

He said Sabal was a member of the PNP Special Action Force from 1998 to 2008 with special training on intelligence, urban counterrevolutionary warfare and explosive ordnance disposal, and also took sniper’s course.

He said Sabal’s death was a “big blow to the chain of supply of firearms and explosive materials to the BIFF which is responsible for various attacks and bombings in Maguindanao and nearby areas.”

The police said the guns that were seized from Sabal and the others at the Batangas City port may have been intended for the BIFF or “partisan armed groups” preparing for the 2022 elections or for use in other criminal activities. —WITH A REPORT FROM RYAN ROSAURO INQ