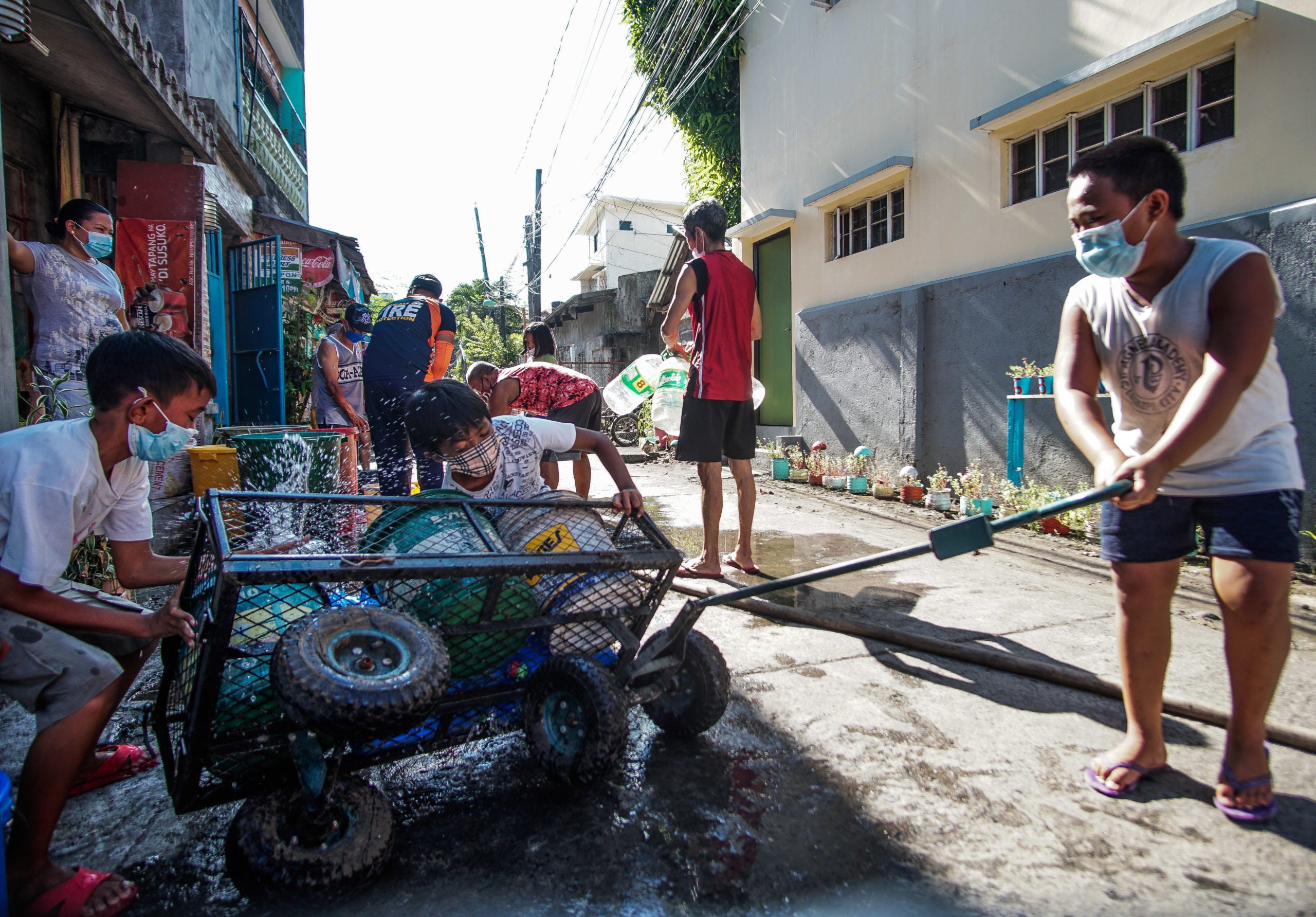 SAVING EVERY DROP A group of children tries to stop their cart carrying pails of water from tilting as Legazpi City residents endure lines in rationing stations in their neighborhoods. —MARK ALVIC ESPLANA

LEGAZPI CITY — Thousands of residents and business owners in this provincial capital of Albay province are up in arms as water supply to their homes and establishments has yet to return four days since their taps ran dry.

Mayor Noel Rosal on Thursday said he would ask the Legazpi City Water District (LCWD) to impose sanctions on Phil Hydro Inc., its bulk water supplier, for the inefficient service that has left 25,000 households without water.

Rosal said if Phil Hydro could readily impose a surcharge on consumers who failed to pay their bills on time, the company should also be fined for failing to deliver the service expected of it.

The mayor said he learned during an inspection on Wednesday that Phil Hydro’s main water pump had never gone through preventive maintenance before it broke down. He said the firm also did not have a standby pump.

“We consumers are placed in this situation because of the negligence of bulk water supplier Phil Hydro … [T]here was no preventive maintenance [on its pumping facility and] no backup for equipment vital to its operation. This is terrible; management is negligent,” he said in a telephone interview on Thursday.

The Inquirer reached Irwin Buenconsejo, Phil Hydro plant head, on Thursday but he declined to be interviewed. He said a letter addressed to their general manager, Mirla de Leon, was needed to get a statement from the company.

Consolacion Destura, a housewife from Albay District here, said she was spending P600 a day so a neighborhood water fetcher would deliver their household needs.

The mounting complaints of residents like Destura prompted the city government and the provincial government of Albay to send out firetrucks and for the LCWD to dispatch trucks to ration water in urban villages in Legazpi.

Phil Hydro entered into a 25-year contract with the LCWD in 2007 to supply 600,000 cubic meters of potable water monthly to the water district, which, in turn, delivered this to households in Legazpi.

Currently, however, Phil Hydro supplies only 18,000 cu. m of water a month because it can no longer explore other water sources in the city.

Phil Hydro gets its supply from Boyoan spring in Barangay Pawa, which serves the villages of Rawis, Arimbay and Bigaa; and from the Yawa River for other LCWD service areas. So far, only 55 of the city’s 70 villages are being served by the LCWD. Other areas draw water from deep wells or springs.