Over P1B given to displaced public transport workers amid pandemic — LTFRB 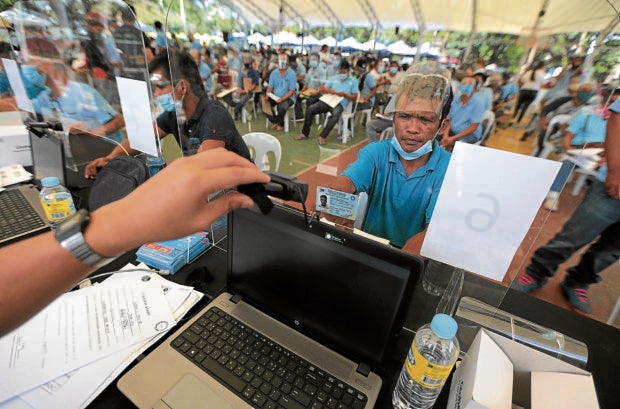 ALTERNATIVE LIVELIHOOD Left without a steady source of income for months while under community quarantine, hundreds of jeepney drivers flock to the
Land Transportation and Franchising Regulatory Board in November 2020 to register in a program that would assure them of earnings under a service contract with
the government. INQUIRER file photo / GRIG C. MONTEGRANDE

MANILA, Philippines — Over P1 billion have so far been distributed to displaced public transportation drivers and operators as beneficiaries under the service contracting program amid the pandemic, the Land Transportation Franchising and Regulatory Board (LTFRB) said on Thursday.

(We have reached a milestone. Yesterday, more than P1 billion have been distributed under the program. And there is continuous distribution of payments for this program.)

The government’s service contracting program allows public utility drivers to earn based on the kilometers traveled instead of the volume of passengers.

The LTFRB said that around 14,131 drivers nationwide had so far received payouts as of June 10. The agency aims to reach 60,000 driver-beneficiaries.

According to the agency, 6,492 registered drivers also received P25,000 each as an “onboarding incentive.”

The Department of Transportation received a P5.58-billion budget for the program under the Bayanihan 2 law.

In relation to unemployed conductors under transportation operations, Delgra said that the issue is under an employer-employee relationship and should be addressed by the companies involved.

The chairman said that the agency urges conductors to “take it up with their employers” and said that “bus operators will have to address the issue of their employees.” Faith Yuen Wei Ragasa, Inquirer trainee

Over 90% of cash subsidies given to PUV operators — LTFRB

Read Next
DOTr starts COVID-19 vaccination of employees
EDITORS' PICK
Smart offers wireless fiber-like speeds to Filipino homes with country’s first 5G Prepaid Home WiFi
Legarda: Ending Violence Against Women, a cause for all
This new condo in the South will make you want to turn a new leaf
National COVID-19 vaccination drive gets over 5.3 million people vaxxed so far
Pandemic prognosis: Where does it go from here?
Google won’t accept election ads for 2022 national polls
MOST READ
Bongbong Marcos to face another disqualification case
Christine Bersola, Julius Babao cleared of cancer after colonoscopy, endoscopy
A Merry Bongbong
Pandemic prognosis: Where does it go from here?
Don't miss out on the latest news and information.