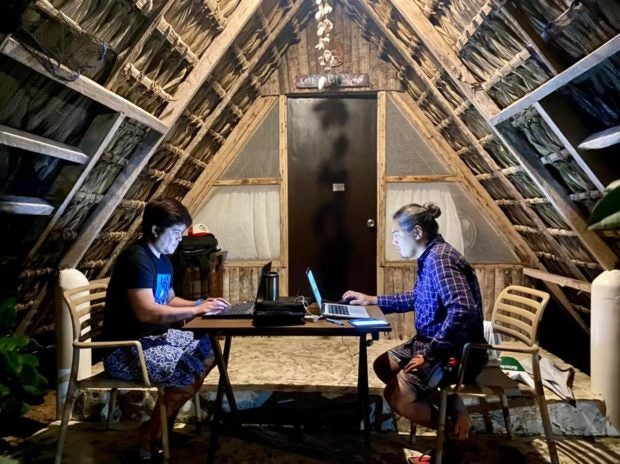 These two men are on a “work from home” arrangement in a beach resort in Pagudpud, Ilocos Norte. The province is looking to attract remote workers and investors as part of its efforts to revive its economy from pandemic-induced losses. (Photo courtesy of The North Beach Camp)

LAOAG CITY—Ilocos Norte is offering incentives to remote workers and investors who want to relocate to the province as it seeks to revive its economy from pandemic-induced losses, officials said Wednesday, June 16.

The Ilocos Norte provincial government had launched its “Move IN” project, which takes advantage of the pandemic situation where most jobs have gone remote.

Ilocos Norte invest office head Soya Cheng-Bueno said the strategy aims “to bring outside money [to] the province by inviting non-residents of Ilocos Norte to work, study, or live in the province.”

The project doubles incentives to those willing to work or study from a new location, Cheng-Bueno said.

Among the incentives are discounts from partner merchants engaged in accommodation, food and beverages, retail, utilities such as gasoline, and medical needs.

Investors in the agribusiness, tourism, manufacturing, renewable energy, and mining sectors could also be exempted from real property taxes in line with the provincial investment code, according to Jefferson Baloaloa, Move IN project coordinator.

At least 26 individuals have expressed interest in the incentive within the first month of the program launch, with 13 of them initially eligible, said Baloaloa.

Around 2,000 small businesses in Ilocos Norte shut down last year, but are now recovering, according to provincial government data.

Baloaloa said the Move IN project is seen to stimulate the economy by assisting local businesses and offering the best of Ilocos Norte to those willing to relocate and invest.