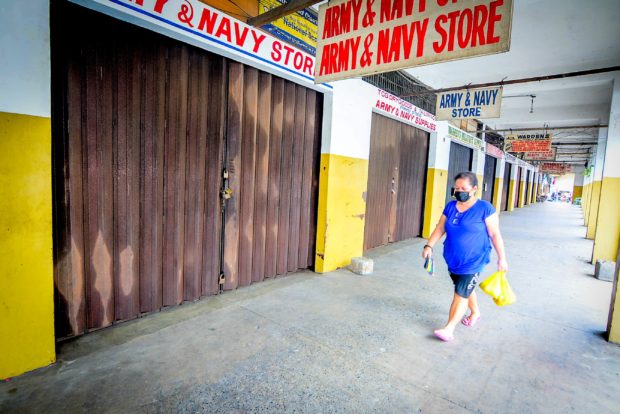 BUSINESS AT A STANDSTILL Several business establishments in Iloilo City have yet to resume operations while the government tries to contain the spike inCOVID-19 cases in this economic hub of Western Visayas region. —IAN PAUL CORDERO/CONTRIBUTOR

In an executive order issued on Tuesday, Treñas said these establishments, like salons, nail spas and barbershops, among others, would be allowed to operate with only 30 percent of their venue capacity as the city’s modified enhanced community quarantine (MECQ) status was extended until June 30.

Treñas said Iloilo City, like other local government units (LGUs), needed to revive the economy and address the needs of residents without compromising the safety and health of Ilonggos.

In an earlier statement, he said owners of small businesses had pleaded that they be allowed to operate so they could recover from their losses and help their workers.

Iloilo City was placed under MECQ on May 23 until May 31 due to a surge in COVID-19 cases. This was extended to June 30 amid record-high daily cases and shortage of hospital beds for COVID-19 patients.

In separate letters on June 14, the Iloilo Business Club Inc. (IBC) and the Iloilo Economic Development Foundation Inc. (Iled) appealed to the Inter-Agency Task Force for the Management of Emerging Infectious Diseases (IATF) to increase the vaccine allocation of the city and the province, citing the worsening situation here.

“The city and province have spent a year and a half battling COVID-19 pandemic, but the virus is still spreading in many barangays and establishments, and producing new variants with the potential to put us back where we started,” according to Iled.

‘Area of most serious concern’

“This public health situation directly impacts our local economy and the business sector is suffering from the effects of strict quarantine protocols,” it said.

“No need to panic buy because we can go out to access essential goods and services,” Miraflor said in a statement.

Gov. Roel Degamo appealed to the public for their cooperation so the surge could be controlled.

“Having the virus is a personal choice. If we use our brains, we will never get the virus,” Degamo said.

OCTA Research, in a report published on Monday, classified Dumaguete City as an “area of most serious concern” outside the National Capital Region Plus area (Metro Manila and the nearby provinces of Bulacan, Laguna, Rizal and Cavite) due to a sharp increase in COVID-19 cases.

Negros Oriental, as of Tuesday, recorded 6,808 cases, with 3,134 classified as active and with 110 deaths, the Department of Health said.

In Quezon province, Lucena City Mayor Roderick Alcala has called on residents to accept the “discipline challenge” as the city shifted to MECQ until June 30.“This new status is a challenge for all. Let us accept it and work together to bring the COVID-19 cases down,” Alcala said in a telephone interview on Tuesday.

The city logged 2,701 cases, with 101 fatalities since the pandemic broke out in March last year. Lucena recorded 264 active cases as of June 14.

In Camarines Sur province, Naga City Mayor Nelson Legacion suspended the operation of entertainment, amusement and indoor and outdoor sports establishments, and tourist attractions until the end of the month while the city is under MECQ. Indoor dining in restaurants is also prohibited.

Both Lucena and Naga had been under the most relaxed modified general community quarantine (MGCQ) since last month.

In Bataan province, Gov. Albert Garcia appealed to residents to cooperate and comply with existing health protocols to prevent the spread of the virus as the province reverted to MECQ.

The province is the only area in Central Luzon placed on MECQ until June 30 due to a spike in COVID-19 cases. As of Monday, Bataan had 1,361 active cases out of 9,649 infections recorded since last year.

Except for Bulacan, which was placed on GCQ, all other provinces and cities in Central Luzon would remain on MGCQ.

“A granular lockdown will be our basis to warn neighbors of infected patients against leaving their homes. This way, we can easily carry out contact tracing,” Paulino said.

As of Monday, the city recorded 285 active cases of the 2,299 infections recorded since last year.