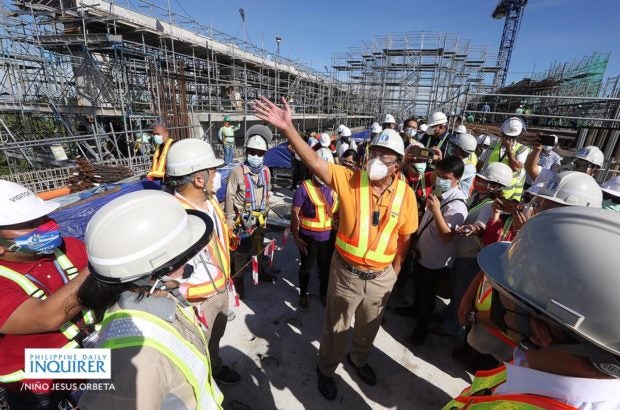 CALUMPIT, Bulacan, Philippines — At least 40,000 jobs will be available in the government’s transportation-related projects until 2024 to accommodate displaced workers, including overseas Filipinos, Transportation Secretary Arthur Tugade said here on Monday.

The 148-kilometer train system is composed of three major railway projects in Pampanga, Bulacan, Metro Manila and Calamba City in Laguna. Its construction is financed by loans from Asian Development Bank and the Japan International Cooperation Agency.

Once completed, the part of the project that will connect Metro Manila and Central Luzon is seen to ease traffic congestion and benefit 200,000 commuters from Bulacan and Pampanga who travel daily to the national capital, Tugade said.

The project’s Phase 1 involves the construction of the 38-km Tutuban (Manila)-Malolos (Bulacan) line, which began in February 2019. The completion of this section, Tugade said, is expected by 2024 although its partial operation will start in 2023. This will require more skilled workers, Tugade said.

Phase 2, which is a 56-km railway from Malolos to the Clark International Airport in Pampanga, began early this year.

Also part of the NSCR is a 56-km suburban commuter rail running from Solis (Tondo, Manila) to Calamba. Bidding for this project has yet to start.

Tugade said an initial batch of 104 coaches for the railway project would be delivered in December this year. These are part of 464 coaches intended for the train system from Clark to Laguna.

He said the government and its partner private firms would continue hiring OFWs, including residents from Bulacan, and skilled workers from the maritime and aviation industries, for its big-ticket infrastructure projects. He said the priority would be those who had lost their jobs due to the pandemic.

Nick Linao, president of construction firm Sta. Clara International Inc. (SCII), said their company had been hiring OFWs for its projects even before the pandemic. SCII is the subcontractor of Japan’s Sumitomo Construction Corp., which won the contract to build the railway system’s Phase 1.

“The success of our international operations was basically anchored on the unique skills set of the many Filipino people choosing to work overseas,” Linao told reporters.

Alex Diaz, 54, a survey manager and a former OFW hired for the project, said the local job opportunity allowed him to stay in the country and be with his family after years of working abroad.

“We are happy that we’re part of this world-class project under the government’s ‘Build, Build, Build’ program,” Diaz said.