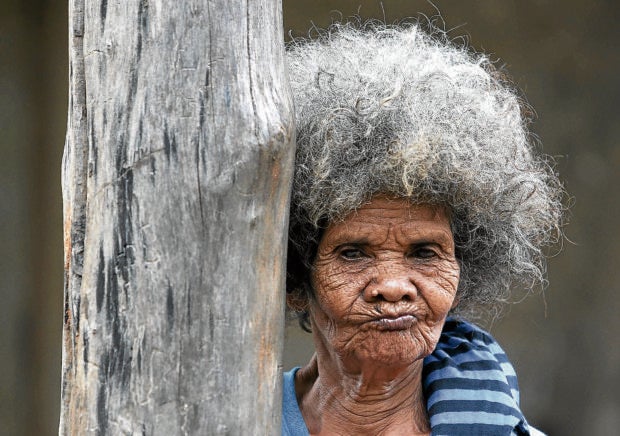 TIGHT COMMUNITY Aeta elders in Zambales are crucial in keeping their tribal communities intact since their displacement from their ancestral domain on Mt. Pinatubo. —MARIANNE BERMUDEZ

CITY OF SAN FERNANDO, Pampanga, Philippines — No return to homeland in sight.

Many Aeta folk remain in this fix in the town of Botolan, Zambales province, as well as those in Tarlac and Pampanga provinces, after leaving their dwellings on the slopes of Mt. Pinatubo to escape the volcano’s eruption on June 15, 1991.

A total of 31,120 tribal members from 7,840 families were then counted by the Office of Northern Cultural Communities (ONCC), now a defunct agency, as having been displaced by the eruption. But the number could be higher, as an ONCC officer in Zambales reported having evacuated over 7,000 families in Botolan alone in April 1991.

In 2015, a Philippine Statistics Authority (PSA) census showed 57,707 Aeta people in Central Luzon, mostly living in resettlement sites on the Zambales side of Pinatubo.

A recent count made by Chito Balintay, a former representative of indigenous peoples (IPs) in the Zambales provincial board, estimates the Aeta population in Botolan to have grown to 12,000 to 15,000 families, with nearly a third choosing to return to 11 villages on Pinatubo’s upper slopes. The rest are still staying in upland resettlement communities close to the town center.

Eleven other similar resettlement sites are in Pampanga, Tarlac and Zambales. Their exact total population has yet to be known in the absence of a survey update of the 2015 PSA census.

The presence of these enclaves indicates that the government has not funded or facilitated the return of displaced Aeta folk to their ancestral lands.

The National Commission on Indigenous Peoples (NCIP) has been slow in recognizing the Aeta people’s right to their ancestral domain. It has so far registered only three certificates of ancestral domain title (CADTs) around Pinatubo. Six other tribes are awaiting their documents.

The CADTs for nine Aeta tribes in the three provinces cover 82,816 hectares, according to NCIP records.

Based on existing laws and guidelines, bringing back the Aeta people to their ancestral domain was not a government policy from the start or even considered an unfinished task.

Republic Act No. 7637, which created the Mount Pinatubo Commission in 1992, set up a P10-billion fund to provide them with “aid, relief, resettlement, rehabilitation and livelihood services as well as infrastructure support” at the resettlement sites.

It aimed at “restoring their living condition” to their “productive pre-eruption conditions” and “with the settlement being chosen according to its suitability as permanent upland abodes thereby ensuring the improvement of these communities.”

Never was it meant to prepare the Aeta tribes for their eventual homecoming.

Executive Order No. 552, issued by President Gloria Macapagal-Arroyo, was concerned with the administration of lowland resettlement sites.

New laws and guidelines would have worked to the Aeta people’s favor, but their members, even those assisted by nongovernment groups, have not been able to take complete possession and control of their lands.

Anthropologist Jean-Christophe Gaillard pointed out in a 2003 study: “At the time of the 1991 Mt. Pinatubo eruption, there were no specific governmental guidelines to protect and defend ethnic minority rights in the Philippines. Hence, it was most unlikely that the Philippine government had appropriate measures for the preservation of the Aeta culture at this time.”

The National Integrated Protected Areas System Act in 1992 and Indigenous Peoples’ Rights Act (Ipra) in 1997 recognize tribal territories. There was also EO 263 in 1995 that set community-based management of forests in indigenous peoples areas as a national strategy to ensure the sustainable development of the country’s forest lands resources.

The reality is that the CADTs—even if approved by the NCIP or in the process of registration at the Land Registration Authority (LRA)—are challenged or delayed by land disputes, questions on the authenticity of surveys, patents and titles, mining projects, tourism activities, segregation of private lands or intertribal conflicts, an Inquirer review showed.

Like other ethnocultural groups, the Aeta people in the eruption-hit provinces have been asserting ancestral domain claims by securing CADTs. Since Ipra was passed into law in 1997, however, the NCIP approved only three CADTs in the three provinces between 2004 and 2008, and registered these with the LRA in 2009.

One of the titled domain, referred to as Sacobia, is embroiled in a leadership squabble among four Aeta groups in Mabalacat City, Pampanga, and in Bamban town, Tarlac. The row stalled the 2007 joint management agreement signed with the state-owned Clark Development Corp., including the distribution of 20-percent Aeta share from investments made in Sacobia.

Tribal leaders partly blamed the NCIP because it took time to decide which leaders to recognize.

The NCIP also confirmed the illegal selling of land but did not say who were doing it.

According to Inquirer sources, retired military officers, elected officials and businessmen are among those who have allegedly cornered lots in Sacobia. The NCIP is seen to be taking more time, admitting that it still has to finish three plans with the stakeholders.

Politicians are known to be among owners of lands in properties segregated for Aeta tribes.

Tribal members in the villages of Belbel, Burgos, Moraza and Villar in Botolan town obtained the first CADT (RO3-BOT-0708-073) in Zambales. But the Samahan ng Katutubong Aeta ng Burgos alleged land-grabbing by a family of businessmen in 1983 and nondistribution of 1,000 ha in 1996.

The Department of Agrarian Reform has reported the release of the Botolan CADT as an accomplishment.

Ladie de Leon, the indigenous peoples’ representative in the Botolan municipal council, said she had filed a proposed ordinance that would ban Aeta members from selling ancestral lands to individuals and companies.

Tribal leaders of land covered by the Botolan CADT have demanded an accounting of supposed P17 million in proceeds from the P1,500 fee collected by the local government from tourists passing through a route in Tarlac. The NCIP claims the Aeta issued a certification precondition to the local government, but Balintay asserts four village chiefs signed it without the approval of the tribes.

Those who are in the process of registering their CADTs have to deal with disputes.

Tribal members in Cabangan town, also in Zambales, were the first in the country to get a certificate of ancestral domain claim (CADC) from the Department of Environment and Natural Resources (DENR) in March 1996, but they are on their 25th year of waiting for their CADT (RO3-CAB-0110-151) to be registered with the LRA.

The heirs of Jose Pidenes in Cabangan are claiming parts of the 5,430-ha domain, with the NCIP saying the “vested rights of Pidenes heirs overlap portion of community residences which IPs do not recognize.”

Aeta people in the villages of Poonbato and Owaog-Nebloc in Botolan discovered in 2019 the ownership claims of the heirs of Leonardo Dayap over 192 ha through 45 patents issued by the DENR in their land covered by CADT (RO3-BOT-0216-205), according to the Samahan ng Katutubo ng Poonbato headed by Elsa Novo.

Those who hold a CADT in Cabatuan village, Botolan, are also in danger of losing parts of their land because of a pending application by a company for an Integrated Forest Management Agreement over 909 ha in the village, a DENR document showed.

Novo also cites the case of the Capas-Botolan Road of the Department of Public Works and Highways, which cuts through their domain without compensating the Aeta community for right-of-way and damaged trees.

In many of the disputes, the NCIP only says the segregation of titled properties is ongoing and that it has asked the Register of Deeds in Zambales to give copies of titles for plotting and lot identification.

The still-to-be-registered CADT (RO3-BAM-1215-195) in Barangay Anupul in Bamban town and Barangays Sta. Juliana and Maruglo in Capas town, both in Tarlac, overlap with the areas of the Bases Conversion and Development Authority (BCDA) and Col. Ernesto Ravina Air Base of the Philippine Air Force, the NCIP says. Aeta residents want Sta. Juliana for its tourism potential as it is the easiest route to Pinatubo’s crater.

Since 2008, five mining projects have been given certification precondition by the Aeta tribes in the three provinces, according to the NCIP. The Mines and Geosciences Bureau has not replied to the Inquirer’s request for information.

Aeta elder Ben Jugatan says the NCIP must live up to its mandate by immediately registering the domain titles around Pinatubo and by helping his people get farm production support.

The ancestral domain in Botolan is so vast that those living there can qualify to have an autonomous authority that will allow them to resolve tribal problems and issues, says Balintay.

“I want to instill to the younger generations of Aeta the values and indigenous knowledge and practices that our ancestors have passed on to us while we await word on whether to return to Baytan or stay in the resettlements,” says Aeta leader Lito “Tubag” Jugatan. INQ