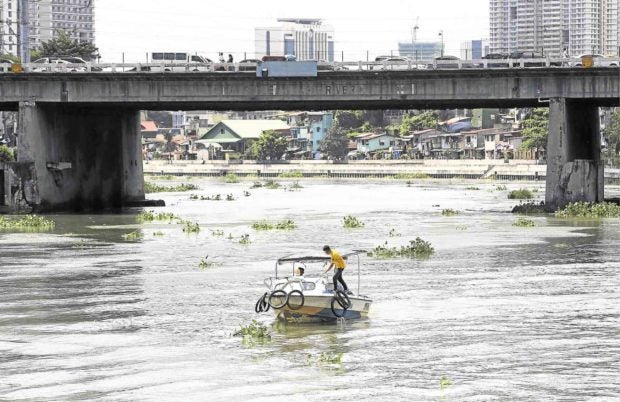 MANILA, Philippines — Major rivers in the Philippines are among the top contributors of plastic wastes in the ocean, with Pasig River topping the list of over 1,600 polluting rivers across the world, according to a recent study.

At least 19 rivers in the country, including Pasig, Tullahan, Meycauayan, Pampanga and Libmanan rivers, were identified in the top 50 waterways that emit plastic, which are ranked based on the annual amount of plastic waste flowing into the ocean.

Published in the journal Science Advances in April, the study showed that more than 1,000 rivers across continents account for nearly 80 percent of global riverine plastic emissions. Its models suggest that small and medium-sized rivers play a significant role in the influx of plastic wastes into the ocean, instead of only a few large rivers identified in an earlier study.

In creating the models, researchers from the nonprofit Ocean Cleanup considered the distance between the rivers and ocean, weather, terrain slope and waste management practices. These are all factors that can affect the travel of plastic toward the ocean; for instance, the longer the travel distance of plastic waste, the lower the probability that it will reach a river channel or the open seas.

The study showed that rivers in the Philippines contribute over 356,000 metric tons of plastic wastes to the ocean annually. Topping this list is the 27-kilometer Pasig River, which snakes across the densely populated Metro Manila. It contributes over 63,000 tons of plastics to the ocean every year, which are funneled through Manila Bay.

Geography, population density and climate also play roles in the journey of plastic wastes into the ocean, researchers said. For instance, if landlocked countries generate large quantities of mismanaged plastic waste, there is a lower chance that these reach the ocean, compared to island-nations that produce lesser amounts of such wastes.

“These results suggest there is no one-size-fits-all solution; rather a combination of measures is needed to reduce plastic emissions,” researchers said.

The Climate Change Commission said the findings supported urgent efforts to turn the tide on the plastic crisis by implementing measures to regulate and even halt the production of unnecessary plastic products, such as straws, stirrers and utensils.

The commission, which is the country’s highest policy-making body on climate, has expressed strong support to the passage of House Bill No. 9147, or the Single-Use Plastics Products Regulation Act, which was recently approved on second reading.