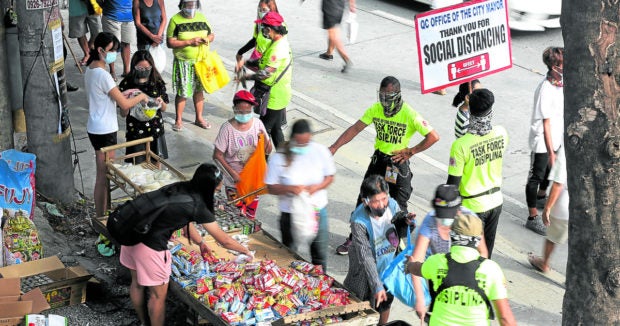 MANILA, Philippines — President Rodrigo Duterte praised the organizers of community pantries on Monday but reminded them to observe health protocols set by the Inter-Agency Task Force for the Management of Emerging Infectious Diseases (IATF) to avoid more COVID-19 infections.

“You know, there’s no question about this pantry scheme. As a matter of fact, I salute the people behind this and those who originated it… But it’s just that they fall short. And maybe I used [the word] ‘ignorant’ because they are ignorant of the provision imposed by law — not by me,” Duterte said, speaking partly in Filipino, in his taped weekly briefing.

“Maybe you have not read it, but in truth, if it’s a matter of assessing whether or not you are doing good, you are doing super good. I salute you, and you have a good conscience when it comes to your fellowmen. But please, read the restriction first,” he added.

Before making these comments, Duterte read a statement about a potential superspreader event in Barangay Matandang Balara in Quezon City — that is, a community pantry organized by Councilor Franz Pumaren which attracted big crowds.  Some participants have already tested positive for COVID-19.

The Department of the Interior and Local Government (DILG) is currently investigating the incident, along with mass gatherings across the country.

Duterte said that organizers should take extra care in setting up pantries as they would surely attract crowds.

“See to it that the regulations are complied with. If there really is crowding there, then that a superspreader,” Duterte said.

“Then it will spread again. There will be no end, just like — you know, we are better off than the other countries. The others — like Japan — again had a spike [in cases].  And I think Malaysia is also suffering from a resurgence. I don’t know what kind of wave is that. But we are of no exception,” he added.

The community pantry that started a nationwide trend started on Maginhawa Street in Quezon City, which was opened so that people whose jobs were affected by the enhanced community quarantine (ECQ) last April would have something to eat. It operated on a simple principle: Take whatever you need, give whatever you can.

Health experts warned, however, that pantries could attract huge crowds if not managed properly — which was what happened at a community pantry that actress Angel Locsin opened in Quezon City. It was swarmed by people seeking aid, and an old man who lined up there collapsed and later died.