America is back with Biden, France’s Macron says 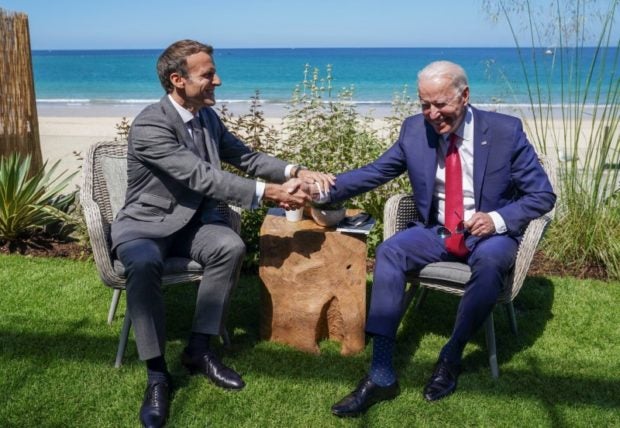 CARBIS BAY, England — The United States is back as a cooperative leader of the free world under President Joe Biden, France’s Emmanuel Macron said on Saturday, illustrating the relief felt by many key U.S. allies that the tumult of Donald Trump’s presidency is over.

Macron’s remark echoes that of British Prime Minister Boris Johnson who hailed Biden on Thursday as “a big breath of fresh air.”

Neither Macron nor Johnson drew an explicit parallel between Biden and Trump, though both praised Biden’s distinctly cooperative tone and officials said there was relief after Trump at times shocked and bewildered many European allies.

Biden, asked by a reporter if America was back, turned to Macron and gestured with his Ray Ban Aviator sunglasses towards the French president that he should answer that question.

“Yes definitely,” Macron said. “It’s great to have a U.S. president who’s part of the club and very willing to cooperate.”

“What you demonstrate is that leadership is partnership,” Macron told Biden as they sat on an outdoor terrace with a sweeping view of the turquoise sea behind them.

“The United States, I’ve said before, we’re back,” Biden said. “Things are going, I think, well, and we’re, as we say back in the States, we’re on the same page.”

Biden added that the United States felt very strongly about the cohesion of the NATO military alliance and expressed support for the European Union – the target of much criticism from Trump during his 2017-2021 presidency.

“I for one think that the European Union is an incredibly strong and vibrant entity, that has a lot to do with the ability of Western Europe not only to handle its economic issues but provide the backbone and support for NATO,” Biden said.

Read Next
‘Whatever it takes,’ UK’s Johnson warns EU over post-Brexit trade
EDITORS' PICK
Connect to PH’s fastest network with new Signature Plan Lite at only P599 per month
Killing of 2 activists hours before SONA condemned
Where’s Duterte’s road map for his final year in office? – lawmakers
Tips for a cheerful life
Hidilyn’s family says Olympic feat unthinkable
Harnessing technology for quality education
MOST READ
Isko for 2022? Manila mayor takes a swipe at Duterte on live broadcast
Pagasa: More monsoon rain in NCR, Luzon; fair weather over Visayas, Mindanao
‘Kasi may nagtapak sa paa ko,’ Duterte says after losing balance during Sona
Why is Taiwan not called Taiwan at the Olympics?
Don't miss out on the latest news and information.