Relive history on a bike in Cavite 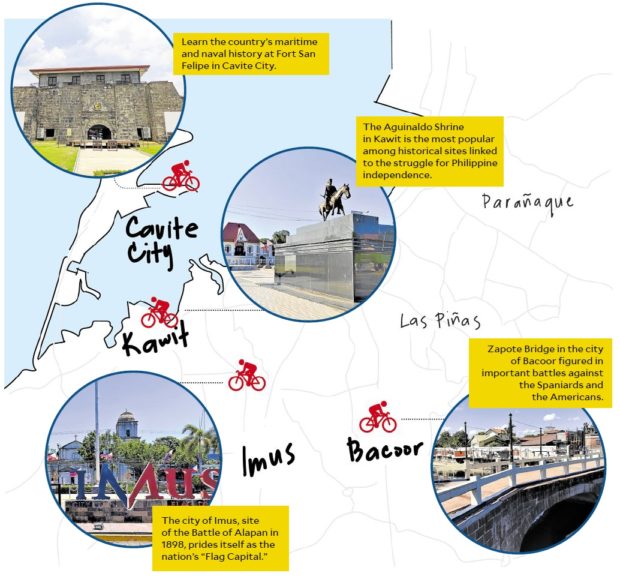 At any given day, the Aguinaldo Shrine in Kawit, Cavite, where Philippine Independence was proclaimed 123 years ago, is teeming with cyclists doing their daily fitness ride.

With the Independence Day observance this weekend, the iconic shrine and the adjoining Centennial Park welcomed more visitors making the bike ride a pilgrimage of sorts to the cradle of freedom and as part of their patriotic duty.

With a plethora of spots which played crucial roles in the revolution against Spain, Cavite is a haven for bikers who wish to take a trip down history lane. These are also alternative destinations to the popular Tagaytay Ridge, a weekend favorite of motorcycle riders and road-trippers.

This writer is among solo riders who periodically pedal around Cavite’s heritage spots in an effort to enrich appreciation of the province’s checkered past.

By pedaling around these spots, history lessons will become alive, making bike rides more exciting and filled with Instagram-worthy photographs.

The following is a cluster of some of Cavite’s historic spots, compiled by this writer according to their locations and themes, to help bikers focus their itinerary:

This rapidly urbanizing city is connected to Metro Manila by Zapote Bridge, which figured in two important battles — against Spanish troops in 1897 and the Americans in 1899. Gen. Edilberto Evangelista, an engineer-soldier who built the defensive trenches, was killed in the 1897 encounter despite the Filipinos’ successful defense of the strategic bridge. To honor his military exploits and heroism, Bacoor’s main municipal road was named after him.

Its old población, or town center, is a heritage district with the presence of the Cuenca Residence, also known as Casa Real, which became a temporary headquarters of Gen. Emilio Aguinaldo after he proclaimed the country’s independence. Located near the popular Digman halo-halo restaurants, the well-preserved ancestral house serves as the city’s de facto museum which can be visited upon special arrangements with the owners.

Standing at the public plaza is a monument commemorating the convention of provincial officials who pledged support for the declaration of independence, and the St. Michael the Archangel Church where martyred priest Mariano Gomez of the famed GomBurZa triumvirate served as parish priest for 48 years.

Known then as Cavite Viejo, the town takes pride in the Battle of Binakayan, where Filipinos scored a major victory during the first months of the revolution in 1896 and boosted the morale of freedom fighters. The three-day battle, which also spanned certain areas of Noveleta and Imus, is immortalized by a tableau across the former Island Cove Resort.

At the town’s interior road is the shrine of Baldomero Aguinaldo, Emilio’s first cousin who held important positions during the revolution and later, the First Philippine Republic. Built in 1906, the two-story museum is managed by the National Historical Commission of the Philippines.

ImusThis industrial city brands itself as the country’s “Flag Capital” for being the site where the newly sewn battle standard was first waved by Aguinaldo after Filipinos defeated the Spaniards at the Battle of Alapan on May 28, 1898. Located inside the Alapan I Elementary School, the site is highlighted by a 31.6-meter (104 feet) flagpole where the annual National Flag Day celebration kicks off.

Another significant battle within its soil is the Battle of Imus, the Filipinos’ first major victory during the first month of the revolution where Aguinaldo trounced troops under Spanish Gen. Ernesto Aguirre. The skirmish is made more colorful when Aguirre dropped his sword during their retreat, and was later picked up by Aguinaldo’s men.

The provincial capital until 1954, it was a Spanish fortress, naval base, and shipping hub back to the Manila-Acapulco galleon trade. Then known as Cavite Nuevo, it is one of the few Spanish-speaking localities in the country due to the deep Hispanic influence which has found its way to its Chavacano language.

Visitors won’t miss Plaza de Armas where Cavite’s Trece Martires, or 13 Martyrs, were publicly executed by Spain after the outbreak of the revolution. Another must-see is Fort San Felipe Museum inside the Philippine Navy headquarters, which chronicles the country’s maritime and naval history. The yard is the site of the 1872 Cavite Mutiny where Filipino Catholic priests Mariano Gomez, Jose Burgos and Jacinto Zamora, known as GomBurZa, were implicated and eventually executed at the Luneta.

History aficionados can also retrace the last days of Katipunan Supremo (supreme leader) Andres Bonifacio who met his tragic end in Cavite in 1897. Loosely called “Bonifacio Trail,” the route begins at Casa Hacienda, where the fateful Tejeros Convention was held to elect the new leaders of the revolution. The site, located in Rosario town, used to be part of San Francisco de Malabon (present-day General Trias City) at that time.

Other sites within the trail are the San Agustin Church convent in Tanza where Aguinaldo took his oath as President of the reorganized revolutionary government, the Casa Hacienda of Naic where Bonifacio and his brother, Procopio, were imprisoned by the President’s troops, and the Bonifacio Shrine in Indang where the Katipunan leader was wounded and another brother, Ciriaco, was killed by an arresting contingent.

Maragondon town is a mute witness of the last days of the Supremo and Procopio, from their hasty and mock trial by a court martial at Teodorico Reyes’ house-turned-museum, the Our Lady of Assumption Church where they were briefly imprisoned, and their execution site on Mt. Buntis.