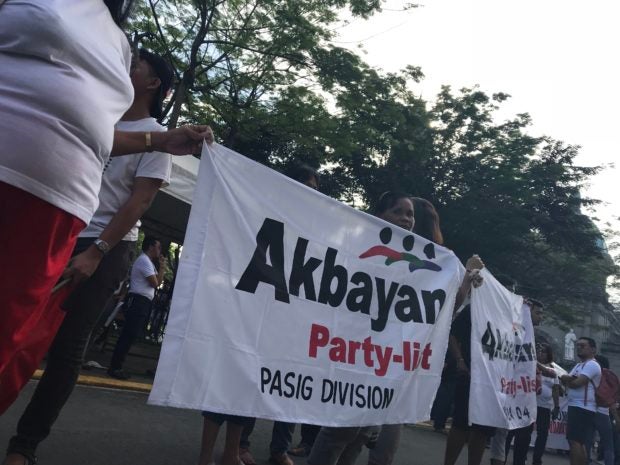 MANILA, Philippines — A left-leaning party-list has challenged the Makabayan bloc in Congress to condemn all supposed atrocities committed by the communist armed group New People’s Army instead of being selective in their statements.

Akbayan, which claims to be the only leftist party-list that does not agree with the NPA’s principles, said this after Makabayan lawmakers condemned the rebels for using anti-personnel land mines which killed Far Eastern University football standout Kieth Absalon and his cousin, unionist Nolven Absalon in Masbate City, Masbate.

But Akbayan spokesperson RJ Naguit stressed on Friday that there is a long list of atrocities committed by the NPA — which deserves condemnation too.

“While the Makabayan bloc’s condemnation of the NPA’s killing of civilians in Masbate is a welcome respite to its long silence at the armed group’s violence and impunity, it should denounce all the atrocities and abuses the NPA has committed against the public, including its extortion activities, recruitment of child soldiers, and the assassinations and threats of violence against progressive leaders and organizations,” Naguit claimed.

Reports from local police said that the Kieth and Nolven, along with the latter’s 16-year-old son, were biking in Masbate’s Barangay Anas when the explosion happened.  The minor survived the incident, but was left with some injuries.

Makabayan lawmakers have issued separate statements condemning the incident in Masbate, but they also clarified that the case must be referred to the Joint Monitoring Committee (JMC), which handles alleged human rights violations committed by both government forces and communist rebels.

Naguit, however, said that it is not correct for the Makabayan bloc to condemn the killing of the Absalons alone, only because these are the cases that are given media exposure.

He also noted that the progressive bloc cannot criticize NPA for the incident, then praise its response afterwards.  Naguit did not specify anyone, but there were statements from notable leftist leaders like former Bayan Muna Rep. Teddy Casiño who said that the NPA’s admission of wrongdoing is a stark contrast to the actions being done by government and law enforcers.

INQUIRER.net has sought the side of Makabayan bloc, but members have not issued a statement as of posting time.

“The Makabayan bloc cannot condemn a single act of violence because of strong public backlash, and ignore the rest of the NPA’s crimes because they don’t land on today’s front page. Selective condemnation is permission,” Naguit said.

“The Makabayan bloc owes this to the people who are sick and tired of the NPA’s impunity. Justice is only truly revolutionary when it is enjoyed by all. If it only belongs to a few, the bloc’s so-called ‘condemnation’ of the NPA remains a shallow and opportunistic gesture. Much like the apology the NPA issued on the killing of civilians in Masbate,” he added.

Akbayan said that one of the NPA actions that should be denounced is the 2005 hit-list issued against other progressive leaders, which included former Commission on Human Rights (CHR) chair and Akbayan Chair Emeritus Etta Rosales.

The Masbate explosion, which the overseeing Communist Party of the Philippines (CPP) said is the doing of the NPA, was condemned widely by several sectors — from CHR, international rights organizations, and opposition leaders like Vice President Leni Robredo.

NPA’s critics have noted that it should adhere with the International Humanitarian Law, which bans the use of anti-personnel land mines as it cannot distinguish between combatant and non-combatant.

READ: Robredo on Masbate blast: No ideology can justify use of ‘inhumane’ land mines

Earlier, CHR agreed with PNP chief Guillermo Eleazar’s proposal that CPP and NPA turn over fighters responsible for the anti-personnel land mine explosion if it is really sincere in its apology.