Reds will never embrace concept of peace, Eleazar says after Masbate mine blast 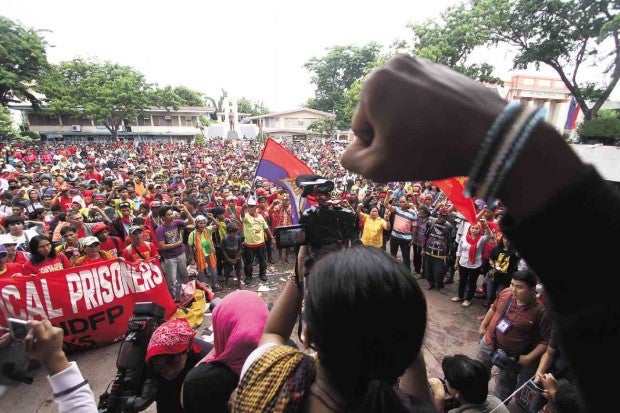 MANILA, Philippines — The Philippine National Police (PNP) on Thursday echoed President Rodrigo Duterte’s pronouncements on the futility of peace talks with the Communist rebels in the wake of the mine blast in Masbate on Sunday that killed a university football player and his cousin.

Police chief Guillermo Eleazar said peace talks with the Communist Party of the Philippines along with its armed wing New People’s Army and the National Democratic Front CPP-NPA-NDF) would be “pointless” because the group “will never embrace the concept of peace.”

“The PNP is for the attainment of genuine peace in the country but this group will never embrace the concept of peace,” Eleazar said in a statement. “So, what’s the point of talking peace with them again?”

Duterte, in an interview with Pastor Apollo Quiboloy, ruled out peace talks with the communists a few days after the Masbate mine blast, which killed Far Eastern University football player Kieth Absalon and his cousin Nolven.

Eleazar noted that the government had released CPP-NPA-NDF leaders in a series of talks in a “gesture of sincerity,” but yet, they have done nothing.

(We are one with the President in saying that it makes no sense to resume the peace talks with them. We have seen that these rebels do not choose time and place and victims.)

CPP has since taken full responsibility and expressed its “deep and sincere remorse” over the incident and began investigating it.

State forces, on the other hand, are now conducting pursuit operations against the suspects.

READ: AFP, PNP to file raps vs NPA for death of civilians in Masbate mine blast

(It is not enough to condemn their terrorist activities, just like what happened in Masbate City. What we need is a whole of government approach to destroy their mass base support.)