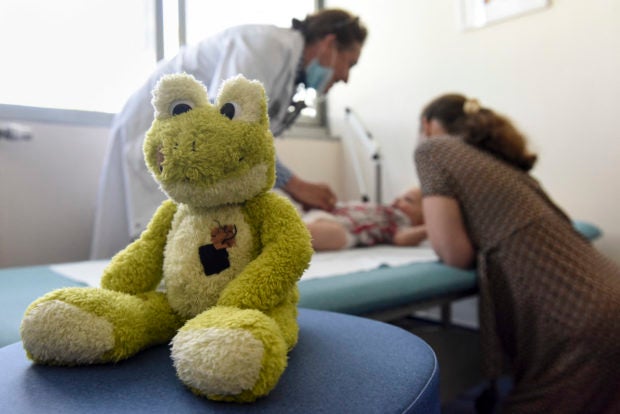 A pediatrician checks a child victim of violence in a Specialized Child Protection Unit (CASED) in Rennes, Western France, on June 07, 2021. AFP

VIENNA — The coronavirus pandemic has had an unprecedented and profound effect on human rights, fueling racism and child abuse, the EU’s rights agency said Thursday in its annual report.

“The pandemic and the reactions it triggered exacerbated existing challenges and inequalities in all areas of life, especially affecting vulnerable groups,” a report by the Vienna-based Fundamental Rights Agency said.

“It also sparked an increase in racist incidents,” the FRA added, calling the pandemic’s effects on rights “profound”.

Marginalized groups such as Roma, refugees and migrants were not only at higher risk of contamination, but also lost jobs owing to strict lockdown measures.

In addition, they were the targets of “racist and xenophobic incidents, including verbal insults, harassment, physical aggression and online hate speech”, according to evidence collected by the FRA and other groups.

It cited sources in the Czech Republic and Germany as saying that calls to  national domestic violence hotlines rose by 50 percent in the former and by 20 percent in the latter between March and June last year.

The agency urged countries to tackle the pandemic and its “unprecedented collective challenge” to human rights with “balanced measures that are based on law” and which were “temporary and proportional”.

The report covers the 27 European Union member states, along with North Macedonia and Serbia.

Read Next
Myanmar junta hits Suu Kyi with graft charges
EDITORS' PICK
PH logs 7,302 new COVID-19 cases — DOH
Taguig exceeds daily COVID-19 vaccination target of 6,800 individuals for 3 days
Robredo urges supporters: Don’t think we’re the only ones who are good
Alex Eala wins Grand Slam on Independence Day: ‘I hope I made my contribution to the country’
Ahead of ONE: Full Blast II, Mongkolpetch warns Elias Mahmoudi: ‘Watch out for my fists’
Kai Sotto continues to inspire Filipinos by sharing his passions and stories with Smart Prepaid
MOST READ
China cautions G7: ‘small’ groups don’t rule the world
Leni vs. Sara
PH to have cloudy, rainy Monday — Pagasa
1Sambayan to nominees: Stick to word of honor
Don't miss out on the latest news and information.