Pagasa warns of moderate to strong rains due to Habagat, monsoon trough 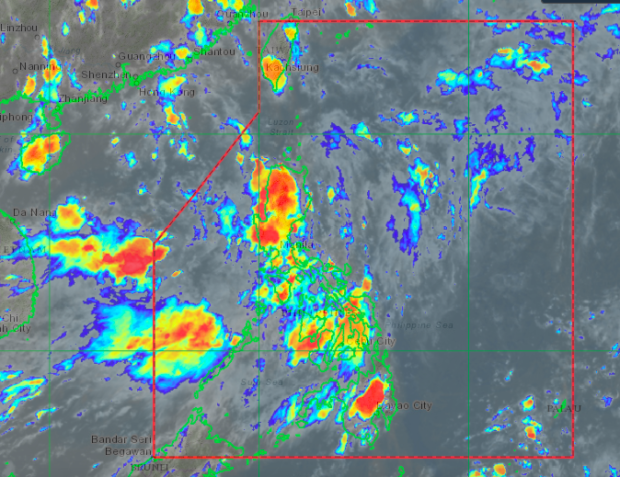 MANILA, Philippines — There is a high chance that huge parts of Luzon and Visayas may experience moderate to heavy rains, as the southwest monsoon or Habagat and the monsoon trough bring thick clouds bands over the country.

Weather updates from the Philippine Atmospheric, Geophysical, and Astronomical Services Administration (Pagasa) on Wednesday afternoon showed clouds with possibly high amounts of rainfall either over the landmass or surrounding the country.

According to Pagasa, monsoon troughs are portions of the intertropical convergence zone (ITCZ) connected to the prevailing monsoon system and low-pressure systems in the vicinity.  The trough starts from the southeastern portion of the Philippine Sea, going northwest over Visayas, Central Luzon, towards the West Philippine Sea and the rest of Asia.

(We have the southwest monsoon, of course, below the monsoon trough, and this is connected with the low-pressure areas all the way to mainland Asia.  People over Luzon, Metro Manila, Visayas, and parts of Mindanao can expect cloudy skies with scattered rain showers and thunderstorms.)

(There are occasions where rainfall would be moderate to heavy, and these may cause flash floods or landslides, especially for the country’s western side.)

A low-pressure area (LPA) is also being monitored by Pagasa, which sits over the West Philippine Sea, at 680 kilometers west of Laoag City in Ilocos Norte.  It is one of the LPAs that sit along the monsoon trough, which is seen as the area where tropical cyclones would generally form between June and September.

Pagasa expects it to develop into a storm, but it is not seen to enter the Philippine area of responsibility as it would move towards China or Vietnam.

For Thursday, state meteorologists expect colder weather, especially for the western parts of Luzon, due to the rains caused by the southwest monsoon.

Temperatures over Metro Manila and Puerto Princesa would be at 24 to 30 degrees Celsius, Laoag with 26 to 31 degrees, Baguio City with 16 to 23 degrees, Tagaytay with 21 to 27 degrees, while Legazpi and Tuguegarao would be warmer at 25 to 32 degrees and 25 to 33 degrees, respectively.

For Visayas and Mindanao, the western side would also be colder than the rest of the provinces, still because of the habagat.  Iloilo and Cebu would have temperatures of 24 to 31 degrees Celsius — slightly lower than Tacloban’s 26 to 32 degrees, Zamboanga and Davao’s 25 to 32 degrees, and Cagayan de Oro’s 24 to 33 degrees.

Pagasa’s three-day forecast showed that the current gloomy weather is expected to continue until Friday for Baguio City, Metro Manila, and Cebu and would start to clear up during the weekend.  Still, the weather bureau warned that isolated rain showers may still occur any time of the day.

In Legazpi and Davao, the weather improves by Friday and remains warm and humid for Saturday and Sunday.

No gale warning has been raised yet, but sea condition around Luzon’s waters, plus Eastern Visayas coast lines would be moderate.  The rest of the country’s seaboards would have a slight to moderate condition.