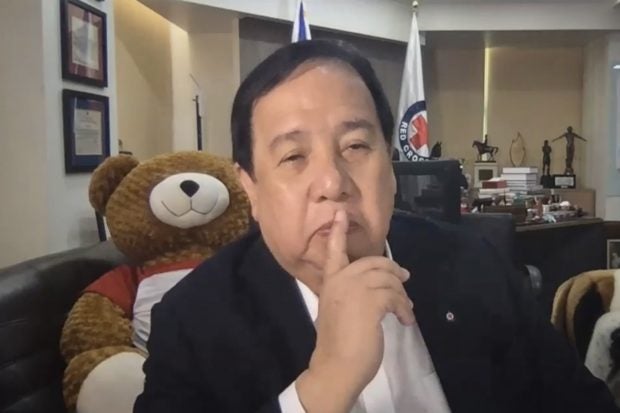 MANILA, Philippines — Senator Richard Gordon said Wednesday he will file a measure that will legislate the “just” salary of nurses from entry-level to senior positions, following Malacañang’s reversal of a Department of Budget and Management (DBM) circular on the adjusted salaries for Filipino nurses.

“We care for our nurses as they are vital to our healthcare system; they are at the forefront. We are glad that finally, they will get what they deserve, but we want to make sure that the memo issued by Malacañang will not be easily amended or retracted, so, we will file a bill that will make that regulation a law. This is one significant way of protecting our nurses,” Gordon said in a statement.

In July last year, Gordon also filed a bill amending the Philippine Nursing Act of 2002 that states that the minimum base pay for nurses working in the government hospitals and health institutions should start at salary grade 15 or roughly P33,000 per month.

“It is imperative that we create policies that are beneficial to [the nurses] and will make them choose to stay in our country because we want them to be with their families and we are also in need of healthcare workers especially now that we are facing a pandemic,” said Gordon.

DBM Circular No. 2020-4, issued on July 17, 2020 raised the salary of entry-level nurses to SG 15 but also demoted the positions of Nurses II to VII to one rank lower, putting a freeze on increases in their pay.

On Tuesday, June 1, the DBM reversed its previous circular issued in July 2020 that modified the salary grades of nurses along with their position. However, this modification confused Filipino nurses on how this might affect their pay and morale.

The Department of Health (DOH) also ordered to suspend the implementation of the circular. However, many hospitals ignored the order, according to the Filipino Nurses United (FNU) association.

FNU president Maristela Abenojar said they are celebrating the announcement on the reversal of the circular since many government nurses will no longer be demoted.

Last year, Gordon also filed a bill modifying Republic Act No. 9173 or the Philippine Act of 2002, which states that Filipino nurses should have a starting pay of about P33,000 per month or a salary grade 15.

Before the bill was enacted, an entry-level nurse would only receive P8,000 to P13,000 worth of income monthly.

The memorandum issued by Malacañang on June 1 this year reverted the DBM circular and increased the salary of Nurse II from salary grade (SG) 15 to SG 16 but retained the position titles of Nurse III to Nurse VII with their respective wages.

Nurses who were affected by the memorandum recently sought the release of at least P43 million worth of salaries that covers salary differentials of at least 823 nurses holding Nurse II positions, out of 1,142 nurses at the Philippine General Hospital.

Presidential spokesperson Harry Roque earlier said that the government may not have available funds to cover the back pays but assured that it will be included in the 2022 budget.  Faith Yuen Wei Ragasa and Sofia Vertucio / Inquirer.net trainee