Fight not over as nurses claim P43 million in back pay 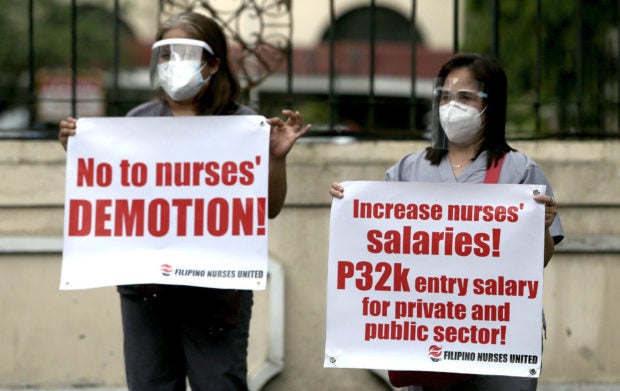 APPEAL In this photo taken during National Nurses Week in October last year, nurses call on the government to look into their plight as they continue to man the front lines of the battle against the COVID-19 pandemic. —RICHARD A. REYES

MANILA, Philippines — A group of nurses at the Philippine General Hospital (PGH) has sought the release of at least P43 million worth of salaries that they were supposed to receive in 18 months but did not, after an impasse following a circular by the Department of Budget and Management (DBM) that drew controversy among government nurses.

The DBM’s Circular No. 2020-4, issued on July 17, 2020, but made retroactive to January of that year, raised the salaries of entry-level nurses but effectively demoted senior nurses and put a freeze on increases in their pay.

The P43 million, according to the PGH Nurses Association, covers only the salary differentials of 823 nurses holding Nurse II positions, out of 1,142 nurses at PGH.

Nurses holding the Nurse II to Nurse VII positions were effectively demoted one rank and salary grade (SG) lower under the DBM circular.

Nurses holding the Nurse II position had that same salary of SG 15 since the Salary Standardization Law III was passed in 2009.

Instead of moving up one pay grade higher—SG 16, which was P35,106 in 2020—they retained their Nurse II pay grade as they were demoted to Nurse I.

But this was corrected by a memorandum dated June 1, signed by Executive Secretary Salvador Medialdea.

The Department of Health (DOH) issued a memorandum in October last year suspending the DBM circular. But many hospitals ignored the order and still demoted their senior nurses, according to the Filipino Nurses United (FNU) association.

The FNU, in response to the Palace directive, said it “celebrates with thousands of government nurses” because the memorandum “proves that the united voice of nurses and the righteous assertion of their legitimate labor rights are critical in claiming back what is due for them.”

The Palace, in its memorandum, said it recognized “the indispensable and essential role of public health nurses in ensuring a functioning health-care system in the country, especially exemplified and highlighted during the current COVID-19 pandemic.”

The PGH itself is at the forefront of COVID-19 referral hospitals in the country.

In a phone interview on Monday, Jossel Ebesate, president of the PGH Nurses Association, said they were thankful that the nursing positions were restored not just for PGH employees but for other health-care workers.

He added, however, that “we fear we might not be able to get the difference [in salaries incurred over that period] anymore.”

According to his computation for Nurse II alone, each nurse holding that position must receive a P54,894 salary differential from January 2020 to June 2021, or a difference of about P3,000 each month between SG 15 and SG 16.

Ebesate said thousands of Nurse II nurses in hospitals run by the DOH or by local governments around the country were affected by the DBM circular.

“We fear they might not give the salary differential anymore from the national budget. But UP (University of the Philippines) has fiscal autonomy and maybe they could get [that amount from its savings] by the end of the year,” he said of the university, whose administration runs PGH.

Ebesate said most PGH nurses stayed on the job despite the demotion, amid the pandemic.

“I just hope the government acknowledges the role [they played],” he said.

Anakalusugan Rep. Michael Defensor, in a statement on Monday regarding the back pay of senior nurses, said: “If their decrease in basic salary was effected starting in January 2020, then their back compensation should be for 18 months up to this month.”

Asked about the budget needed for this, he said “we still don’t know the exact number but we can easily compute the number of nurses demoted.”

“If need be and if not included in the salary standardization budget, we can integrate [this] in the passage of Bayanihan 3,” Defensor said.