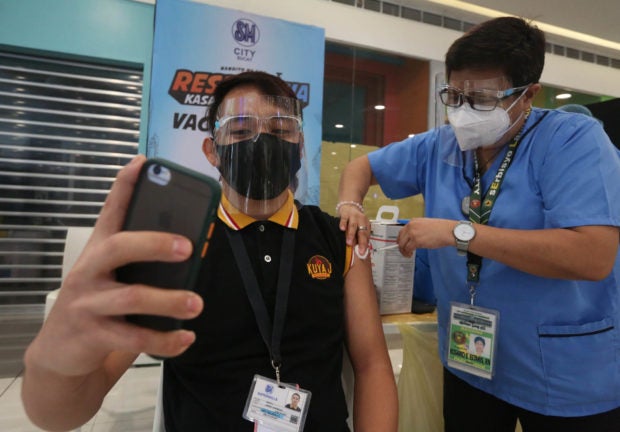 OUR TURN A restaurant staff at a shopping mall in Parañaque City gets inoculated as the government starts its COVID-19 vaccination drive for economic front-liners.—MARIANNE BERMUDEZ

MANILA, Philippines — Despite the slow rollout of COVID-19 vaccines among top priority sectors, the Department of Health (DOH) on Monday opened wider its inoculation doors for workers who physically report to their places of employment or are on field assignment, including household helpers and self-employed people.

Malacañang described the expanded vaccination drive against the coronavirus disease as a game-changing move that was expected to accommodate the economic front-liners, or some 35 million workers in the government, private and informal sectors who work outside their homes, under the A4 priority.

“I am pleased to join you today as we mark a major milestone in our battle against COVID-19. We can now see the light at the end of the tunnel as the vaccine shipments have arrived, have started to arrive in bulk,” President Duterte said in a taped message.

The official vaccination drive began on March 1 among health workers (A1), then the elderly (A2) and adults with existing illnesses (A3). As of Sunday, 4.4 million people have been given at least one dose, including 1.5 million who have completed two doses.

The government aims to inoculate some 70 million people to achieve herd immunity against the coronavirus, but its timetable has remained uncertain.

Even before the vaccination of the economic front-liners officially started, 10,827 have been given at least one dose. Workers departing for overseas jobs within the next four months have been reclassified as A1.

With the simultaneous vaccination of workers, the DOH tasked local governments with setting up priority lanes for those in the top three categories.

Under the guidelines released by the DOH on Monday, priority will be given to the so-called “NCR (National Capital Region) Plus 8,” consisting of Metro Manila, Bulacan, Cavite, Laguna, Rizal, Pampanga, Batangas, Metro Cebu and Metro Davao as these areas are “prone to the resurgence of COVID-19 cases.”

When more vaccines become available, eligible workers in the rest of the country will be next in line, according to the DOH. But Galvez said the second phase could begin once these areas have vaccinated members of the A1 to A3 categories.

If vaccine supply is limited, workers aged 40 to 59 will be given priority.

“It’s clear from broad and thorough studies that the older members of the group for prioritization are the ones affected by COVID. They contribute the biggest percentage of those who die or get severe COVID-19 complications,” Health Secretary Francisco Duque III said.

The DOH said all establishments must submit their list of eligible workers to local governments, which will decide on the eligibility of informal sector workers in their areas.

Establishments that meet requirements are allowed to organize vaccination activities in workplaces or in sites designated by local governments.

Even vaccines procured by private companies and organizations in coordination with the government shall be used for the vaccination of workers, said the DOH.