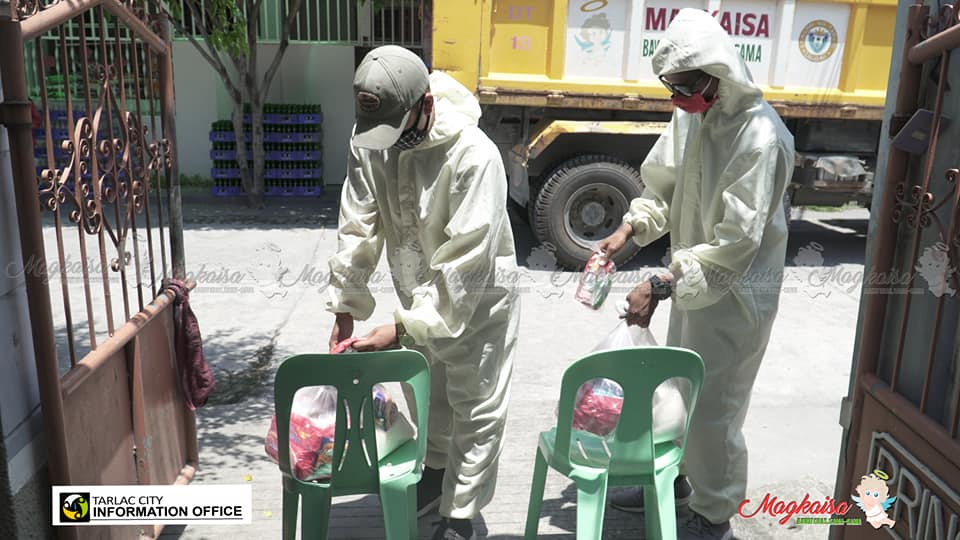 Tarlac City government employees distribute relief packs to households as part of the Bayanihan Grants to Cities and Municipalities. The Commission on Audit said 6,890 of the relief packs were “unaccounted for.” (Photo from the Tarlac City information office)

MABALACAT CITY, Pampanga –– Of the 125,000 packs of relief goods the national government funded through the Bayanihan Grants to Cities and Municipalities (BGCM) in Tarlac City, 6,890 packs were unaccounted for, the Commission on Audit (COA) disclosed in its report.

In the COA report submitted to Tarlac City Mayor Ma. Cristina Angeles on May 20, the state auditing agency said the city bought 25,000 packs of relief goods and 97,694 pieces of bar soap using the P94,884,700 BGCM fund it received from the national government on April 16, 2020.

The relief goods and bar soap were for the residents of its 76 barangays.

“Based on the submitted summary report of relief distribution for the second wave, the entire 125,000 packs were distributed to all 76 barangays, including the 4,130 packs allocated to ‘MO’ – Mayor’s Office. However, the details and distribution list provided to the Audit Team were short of 6,890 packs,” the COA report stated.

The COA said the 6,890 relief packs that were unaccounted for include 801 packs that should have been distributed to residents of Barangay Balibago 1st; 1,779 packs for Barangay Maligaya; and the 4,310 relief packs allotted to the Mayor’s Office.

The Inquirer reached out to Angeles and the Tarlac City information office for comments but they have yet to respond.

On June 1, Cesarina Macuha, secretariat of the city’s Bids and Awards Committee and member of the city’s Local Finance Committee, replied on behalf of Angeles via e-mail.

Macuha insisted that the COA already received the documents and list of recipients.

She said the goods were distributed house-to-house, but due to restricted movements amid the pandemic, the list of recipients from barangay officials and to various frontliners was submitted to the City Social Welfare and Development Office at a later date.

Asked why the Mayor’s Office was allotted 4,130 packs of goods intended for residents of the City’s 76 barangays, she said these were given to various government frontliners, such as policemen, soldiers, firefighters, and city government employees.

Macuha noted that the distribution list documents were already given to the COA.

“It was ECQ (enhanced community quarantine), no stores were open and these brave frontliners amidst the threats should also be given food for their families,” she added, reiterating that relief packs that went to the Mayor’s Office were all accounted for.

But in its May 20, 2021 audit report, the COA said: “We requested for the complete list from the Management (Mayor’s Office) but to no avail.”