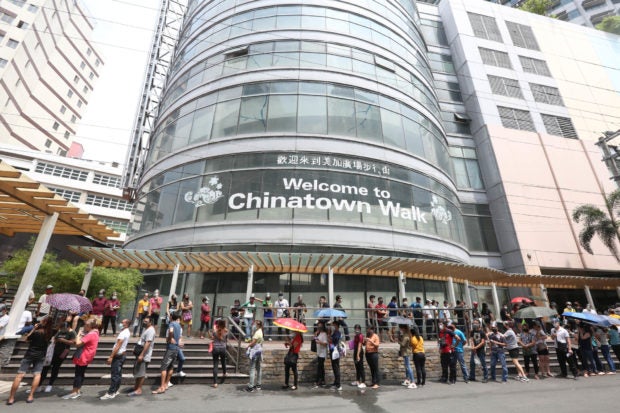 NEXT PRIORITY People belonging to the A4 priority group form a long line on Tuesday for their COVID-19 shot outside a Manila shopping mall being used as a vaccination site. The A4 grouping covers front-line workers in essential sectors, including uniformed personnel. —MARIANNE BERMUDEZ

MANILA, Philippines — The Department of Health (DOH) on Tuesday said Pfizer jabs could now be given to people 12 to 15 years old, but it advised the public to wait for further instructions on its rollout due to a supply shortage of the US-made COVID-19 vaccine.

The Philippines has so far received only 193,000 Pfizer doses through the global Covax initiative, which is co-led by the World Health Organization (WHO), although vaccine czar Secretary Carlito Galvez Jr. said more than two million Pfizer doses would be arriving this month.

Health Secretary Francisco Duque III said the Food and Drug Administration on May 28 amended the emergency use authorization (EUA) of Pfizer to include the younger age group, based on the recommendation of a vaccine experts panel. The original EUA issued to Pfizer indicated its use for those 16 years and older.

President Duterte earlier said Pfizer shots should be reserved for the poor, in accordance with the rules set by Covax global vaccine pool.

Since the government began imposing various levels of community quarantine on March 20, 2020, residents age 15 years old and below have been barred from leaving their homes. Young people, however, are considered to have the lowest risk of contracting severe Covid-19 and dying from the disease, according to the World Health Organization.

The DOH announcement came almost two months after Pfizer released a study showing its vaccine “demonstrated 100 percent efficacy and robust antibody responses” in the 12-15 age group. The results also exceeded the efficacy rate recorded in the 16-25 bracket, the company said in a statement on March 31.

“Pfizer is [now allowed for] 12-15 years old, with or without comorbidity, but given insufficient vaccines, only those with comorbidities are included under A3 prioritization,” said Duque, referring to people with underlying health condition.

“Our vaccination strategy remains the same — prioritize the vulnerable and adhere to our prioritization framework,” she said.

The ongoing government vaccination program covers those in the A1 to A4 priority groups. Under A1 are health-care workers while A2 are the senior citizens. Those under 60 years old but with comorbidities or underlying health conditions that make them more vulnerable to the virus are under A3. Front-line personnel in essential sectors or workers who needed to be physically present in their places of work are under A4.

However, Galvez reported during President Rodrigo Duterte’s regular public address on Monday night that while the country’s adult population were being inoculated, pediatric vaccination or the inoculation of minors could happen soon, citing ongoing studies or approvals of vaccine brands CoronaVac, Pfizer and Moderna for those age 3 to 17, 12 to 15, and 12 to 17 years old, respectively.

Eleven other vaccine brands have ongoing clinical trials for pediatric use as well, he noted.

He said immunizing the country’s younger population of about 29 million would pave the way for the reopening of face-to-face classes.

In his report, Galvez also said that the Philippines had breached the six-million mark of administered COVID-19 vaccine doses.

More than 1.5 million were now fully protected after receiving two doses of the COVID-19 vaccines, he noted.

Galvez, who is also chief implementer of the National Task Force Against COVID-19, said more than 200,000 vaccine jabs were being administered each day on average.

On supply, Galvez reported that the country would get 11.06 million doses this month, including the one million from Sinovac Biotech that arrived on Sunday.

He said the government would be receiving 100,000 Sputnik V doses today (Wednesday), another one million from Sinovac on Thursday, and 2.28 million Pfizer doses donated through the Covax Facility either on June 11 or 12.

One million more Sinovac doses would arrive on June 17, followed on June 21 by 250,000 Moderna doses, of which 50,000 would go to the private sector, and 2.03 million AstraZeneca doses in the third week of this month.

Scheduled to be shipped in July are 10.67 million doses, including 4.5 million CoronaVac, one million Moderna, 1.17 million AstraZeneca and one million Sputnik V.

Galvez earlier said that the country needed a steady supply of 15 million doses a month and a vaccination rate of 500,000 jabs a day if population protection was to be achieved by November in Metro Manila, six nearby provinces, Metro Cebu and Metro Davao, areas the government had identified as priority targets.

However, Galvez said he was optimistic that the Philippines would receive around 17 million doses of COVID-19 vaccines this August and an unhampered supply in the next quarter if negotiations with vaccine manufacturers and the Covax Facility would end successfully.

Meantime, President Duterte appealed to Filipinos who have had their first dose of the COVID-19 vaccine to make sure they get their second shot and directed local officials to find those who needed to complete their inoculation.

In his regular public address on Monday, Mr. Duterte said the second dose was necessary for them to maximize their protection from the coronavirus infection.

“Please find time to go back and line up and show your card so that they would know that you are receiving the second dose, that is the booster,” Mr. Duterte said.

They also needed to continue observing minimum health standards, particularly the wearing of masks, washing of hands and observing physical distancing, he added.

Mr. Duterte directed barangay officials and mayors to search for the recipients of the second dose to ensure they get it.

The DOH said 10 laboratories failed to submit data on time.

“Based on data [from] the last 14 days, the 10 nonreporting labs contribute, on average, 2.7 percent of samples and 2.9 percent of positive individuals,” the DOH said.

—WITH REPORTS FROM JEROME ANING AND LEILA B. SALAVERRIA