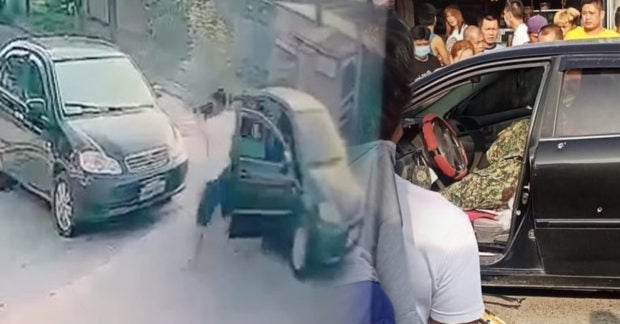 Screengrab from a CCTV showed PSSgt Michael Maun being fired at while inside his car by still unknown assailants, resulting in his death.

MANILA, Philippines — A police officer detailed to the Philippine National Police (PNP) Aviation Group based in Clark Field, Pampanga was shot dead in Tarlac on Tuesday.

Initial investigations revealed that the victim was headed home in his Toyota Altis when another black Toyota Altis suddenly overtook him.

Maun was then shot several times by two unidentified men before fleeing in their vehicle.

He was rushed to Ng Capas Hospital for medical treatment but was pronounced dead upon arrival.

A CCTV camera captured the incident and an immediate investigation was launched for possible identification and arrest of the gunmen.

In checking with the Land Transportation Office, the police said the license plate was for a different car, an extreme black Toyota Vios.

The Tarlac police confirmed to INQUIRER.net that the plate number’s registered owner is a resident of San Fernando, Pampanga. This means the plate number was either faked or stolen.

“We will exert all our efforts and look into the bottom of this. We continue to solicit the support of the general public in order to maintain peace and order, safety and security of our communities,” De Leon said.