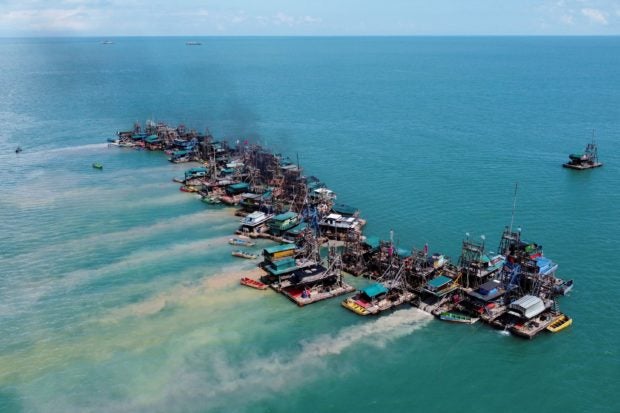 An aerial view shows wooden pontoons equipped to dredge the seabed for deposits of tin ore off the coast of Toboali, on the southern shores of the island of Bangka, Indonesia, May 1, 2021. Picture taken with a drone. REUTERS

TOBOALI, Indonesia — From the shores of Indonesia’s Bangka island, miners like Hendra head out by boat every day to scores of crudely built wooden pontoons dotted off the coast that are equipped to dredge the seabed for lucrative deposits of tin ore.

Indonesia is the world’s biggest exporter of tin used in everything from food packaging to electronics and now green technologies.

But deposits in the mining hub of Bangka-Belitung have been heavily exploited on land, leaving parts of the islands off the southeast coast of Sumatra island resembling a lunar landscape with vast craters and highly acidic, turquoise lakes.

Miners are instead turning to the sea.

“On land, our income is diminishing. There are no more reserves,” said Hendra, 51, who shifted to work in offshore tin mining about a year ago after a decade in the industry.

“In the ocean, there are far more reserves.”

Often grouped together around undersea tin seams, the ramshackle encampments of pontoons emit plumes of black smoke from diesel generators that rumble so loudly workers use hand gestures to communicate.

Hendra, who like many Indonesians uses one name, operates six pontoons, each manned by three to four workers, with pipes that can be over 20 meters (66 feet) long to suck up sand from the seabed.

The pumped mixture of water and sand is run across a bed of plastic mats that trap the glittery black sand containing tin ore.

Hendra is among scores of artisanal miners who partner with PT Timah to exploit the state miner’s concessions.

The allure of tin under the sea

Timah has been ramping up production from the sea. Company data shows its proven tin reserve on land was 16,399 tonnes last year, compared with 265,913 tonnes offshore.

The huge expansion, coupled with reports of illegal miners targeting offshore deposits, has heightened tension with fishermen, who say their catches have collapsed due to steady encroachment on their fishing grounds since 2014.

Fisherman Apriadi Anwar said in the past his family earned enough to pay for his two younger siblings to go to university, but in recent years, they have barely scraped by.

Apriadi says fishing nets can get tangled up in offshore mining equipment, while trawling the seabed to find seams of ore has polluted once-pristine waters. “Fish are becoming scarce because the coral where they spawn is now covered with mud from the mining,” he added. Indonesian environmental group Walhi has been campaigning to stop mining at sea, especially on Bangka’s western coast, where the mangroves are relatively well-preserved. “The mangrove is an ecological fortress for the coastal area,” said Jessix Amundian, executive director with Walhi Bangka Belitung.

In a statement, Timah said it communicates with fishing communities to improve their catch, adding it had built artificial reefs to help restock the sea in line with regulations.

Authorities have cracked down on the tin industry from time to time, particularly illegal mining, and remaining land reserves are often hard to access or require heavy machinery to exploit.

Still, rising tin prices are an incentive to overcome these obstacles.

Amri, an unlicensed miner in Bangka, said he had restarted his land operations after a 14-month hiatus when tin prices rose due to tighter global supplies.