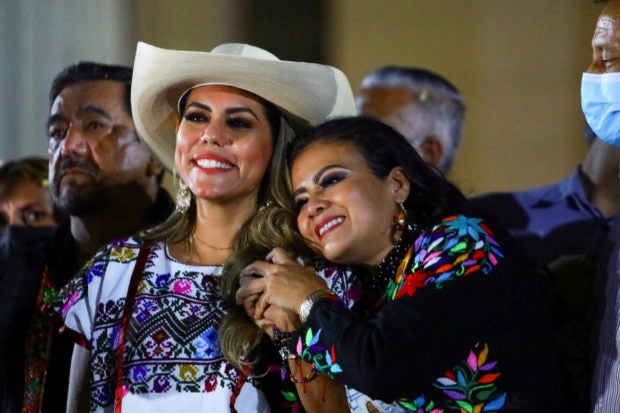 MEXICO CITY — Women were poised to win a record number of state governors’ offices in Mexican midterm elections on Sunday, capturing territory long dominated by men and giving them a bigger political platform to reach the presidency one day.

Preliminary tallies by electoral authorities on Monday showed female candidates securing six of the 15 regional bastions on offer, just two shy of the total number of women ever elected to lead regional governments in Mexico’s history.

Five of the six went to President Andres Manuel Lopez Obrador’s National Regeneration Movement (MORENA), which dominated the state votes, even as the leftist party’s hold on the lower house of Congress weakened.

If results are confirmed, it means the northern border states of Baja California and Chihuahua, Guerrero and Colima on the Pacific coast, as well as Tlaxcala in the center and Campeche in the south, will be governed by women.

FEATURED STORIES
NEWSINFO
Palace: Face shields no longer needed to be worn outdoors
NEWSINFO
Duterte-Duterte tandem possible but ‘winnability is another question’ — Binay
NEWSINFO
ICC is everything but a court of ‘white people’

“This is a cultural shift,” said MORENA lawmaker Gabriela Cuevas, the first Mexican to head the Inter-Parliamentary Union, a global body of national parliaments. “And definitely a step forward for women in our country and in political life.”

Only eight women had previously won regional elections, including the current mayor of Mexico City, MORENA’s Claudia Sheinbaum, who is regarded as one of the favorites to succeed Lopez Obrador as president.

Since Griselda Alvarez was chosen to run Colima in 1979 – a few weeks after Margaret Thatcher made history as Britain’s first woman Prime Minister – Mexico’s handful of female governors very rarely overlapped with other women in the job.

Now seven out of the 32 regional governments, including Mexico City, will be run by women simultaneously.

That is likely to create space for a different kind of politics where women’s concerns gain in prominence, said Francisco Abundis, head of Mexican polling firm Parametria.

That was especially true as three of the new governors are under 40 and may have long careers ahead of them, he noted.

The latest national census showed there are roughly 3 million more women than men among Mexico’s population of 126 million, and political leaders are increasingly at pains to ensure equal representation in government.

Lopez Obrador made history in 2018 by appointing a cabinet split evenly between men and women, though he has come under fire from women’s groups for failing to take seriously enough issues like domestic violence and abortion rights.

Many women were angry about Lopez Obrador’s support for MORENA’s original candidate for Guerrero, Felix Salgado, whose campaign was dogged by rape accusations.

Salgado denied the allegations but was eventually forced out of the race by electoral authorities for campaign finance irregularities. He was replaced by his daughter Evelyn, who won Guerrero on Sunday night, the results showed.

Some Mexicans argue that male domination is still too deeply entrenched in the country for a female president to be realistic as soon as 2024, when the next election is due.

“Because of the macho mentality,” argued Gypsy Lara, a 29-year-old business owner in Mexico City who said she would be happy to back Sheinbaum for president.

Sheinbaum, whose popularity took a hit last month over a metro accident that killed 26 people, had a tough night on Sunday with MORENA suffering shock losses in city elections.

Despite the setbacks, the 58-year-old is still one of the strongest candidates for the presidency, said Abundis.

“I think (female candidates) will be one of the cards to play in 2024,” he said. “With everything we’re seeing in terms of gender-based movements in the country and the world, in Mexico it’s more of a contrast with the whole macho tradition.”