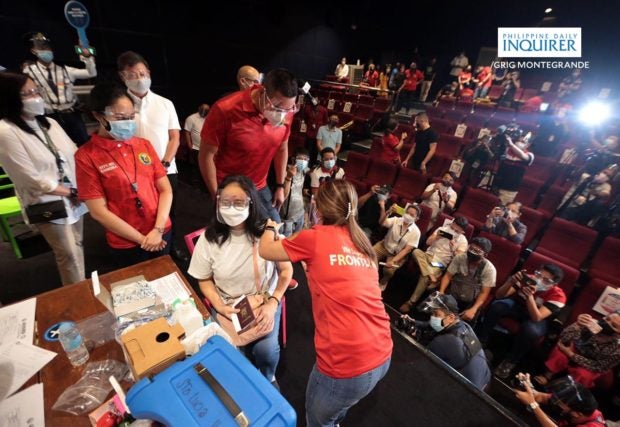 San Juan City Mayor Francis Zamora inspects the Theatre Mall Cinemas 1 and 2 of Greenhills Mall in Greenhills, San Juan on Tuesday, June 1. The LGU of San Juan in partnership with the Greenhills Mall and Music Museum designated the said venue as an additional vaccination center which can cater to up to 1,500 vaccinees a day. — INQUIRER/GRIG C. MONTEGRANDE

MANILA, Philippines — The local government of San Juan City will start the inoculation of essential workers or those under the A4 priority group on Tuesday, said Mayor Francis Zamora, adding that they aim to vaccinate 3,000 critical workers every day.

(Yesterday, we were just waiting for the announcement of the IATF, because they ordered us to wait until the official announcement. So we decided to just finish the ceremonial A4 vaccination first yesterday and today we will officially start our A4 vaccination.)

All individuals who are required to leave their homes for work or profession are classified under the A4 category and are referred to as “essential workers.”

(If we vaccinate 3,000 a day, in the next few days or in five days, supplies will be depleted.)

Zamora, however, revealed that only 13,000 doses are left in San Juan’s vaccine supply.

The mayor said 2,000 doses are allotted for essential workers who live in San Juan City, while another 1,000 is allotted for those who reside in a different city but work in San Juan.

According to Zamora, the city government has already finished inoculating registered citizens in the A2 (Senior Citizens) and A3 (Persons with Comorbidities) category, but priority lanes have still been placed in vaccination sites in case someone from the more prioritized groups decided to get vaccinated.

He added that they have already inoculated a total of 32,000 San Juan citizens.

The Philippines launched a “symbolic” vaccination of economic frontliners or those belonging to the A4 priority group on Monday.

The A4 list includes private-sector workers who are physically present in their workplace; employees in government agencies and instrumentalities, including government-owned or controlled corporations and local government units; informal sector workers and self-employed individuals who work outside their homes; and those working in private households.