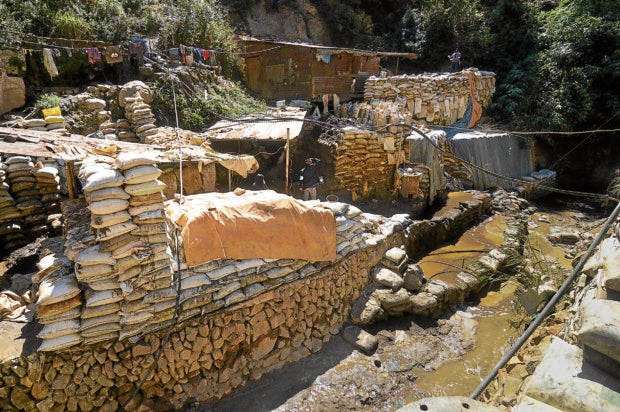 RISKY BUSINESS Pocket mines like these behind the Philippine Military Academy in Baguio City were closed in 2018 because of both environmental and other risks they pose. This year, “Minahang Bayan” zones have been activated in the Cordillera provinces of Benguet, Apayao and Mountain Province, where small-scale mining can be regulated. —KARLSTON LAPNITEN

BAGUIO CITY, Benguet, Philippines — Seven “Minahang Bayan” (people’s mine) zones have been approved this year while two more have been cleared by Environment Secretary Roy Cimatu to help the mineral-rich Cordillera region bounce back from the economic downturn triggered by the coronavirus pandemic, the Mines and Geosciences Bureau (MGB) announced on Monday.

The opening of pocket mine zones in the towns of Itogon and Bakun in Benguet province, two in Apayao province’s Conner town and another in Sagada town in Mountain Province was first announced by Agriculture Secretary William Dar last week.

But Benguet now has a third Minahang Bayan while Abra province was granted its own last week by its provincial mining regulatory board (PRMB), said Fay Apil, director of the MGB in Cordillera, in a briefing on Monday.

The two other Minahang Bayan zones cleared by Cimatu for Apayao are awaiting their declaration by the Apayao PMRB.

Mining, both small scale and those operated by large companies, is an important economic propeller in the Cordillera because of its rich deposits of copper, gold and silver. Corporate mining in Cordillera officially began in the 1903s. The Igorots have also been panning gold since the late 1800s (19th century).

Mining is considered a family tradition in the region. In Itogon alone, there are about 10,000 small-scale miners, local data showed.

But the massive 2018 landslide that buried 80 families of small-scale miners in Itogon, home to the country’s pioneer mines, “had cast a spotlight on the risks involved in unregulated pocket mining activities,” said Dar during a June 1 government roadshow in the run-up to this year’s State of the Nation Address of the President.

The Minahang Bayan system resolves some of these safety issues, said Dar, also the region’s Cabinet secretary for development and security.The first year of the pandemic resulted in a recession, but the total metallic production value in the region ended that year on a “positive note” said Alfredo Genetiano, chief of the mine management division of the MGB in the Cordillera.