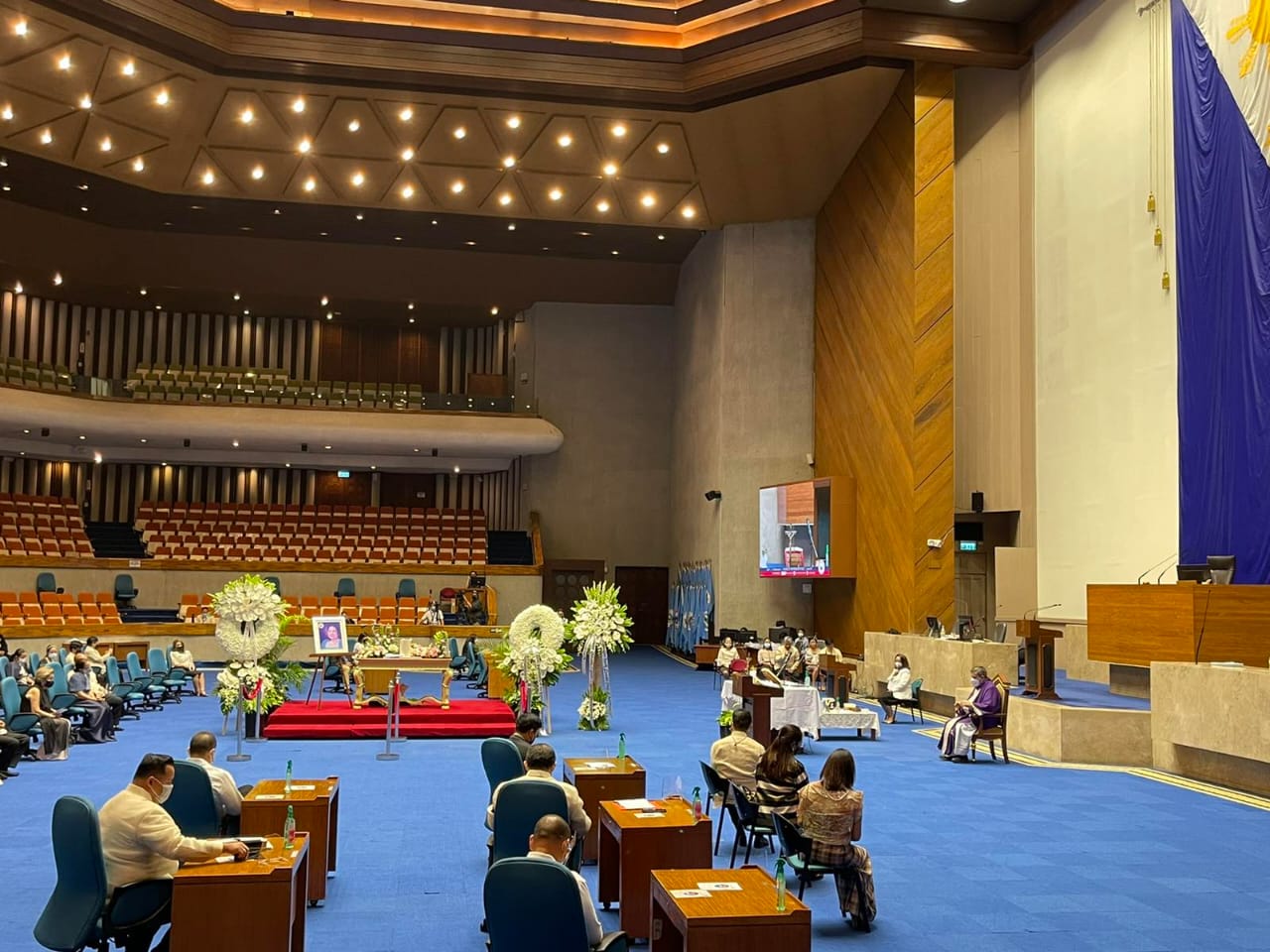 The House of Representatives held a necrological service for late former Occidental Mindoro representative and Deputy Speaker Ma. Amelita “Girlie” Villarosa who died at the age of 78.

MANILA, Philippines — The House of Representatives honored Monday the legacy of late former Occidental Mindoro representative and Deputy Speaker Ma. Amelita “Girlie” Villarosa who died at the age of 78.

The lower chamber held a necrological service for Villarosa at the Batasan Pambansa in Quezon City. The late lawmaker served as the first woman deputy speaker during the 14th Congress and as senior deputy minority leader during the 15th Congress.

Villarosa likewise represented the lone district of Occidental Mindoro during the 11th and 13th Congress.

Velasco also called Villarosa as a “tireless advocate for tourism of her beloved province of Occidental Mindoro,” having helped set up the Apo Reef Natural Park and put Apo Reef, the world’s second-largest contiguous coral reef system and the largest in the country, as a top diving destination in the world.

“Smart, motherly, and yet determined and fierce as a tamaraw, Tita Girlie, as Deputy Speaker of the House, made sure that the legislative mill of the 13th, 15th, and especially, the 14th Congresses continued to grind, despite any political and economic disorder,” Velasco said.

“A consensus-builder, she coaxed, mentored, and helped lawmakers pass many laws we enjoy today. More importantly, she empowered other women legislators to assert their own voices within these august halls traditionally dominated by strong-willed men,” he added.

Meanwhile, House Majority Leader Martin Romualdez said Villarosa “left a void in our hearts too difficult to fill as she was not only a colleague or a friend.”

“She was the embodiment of what we all envision a Filipino woman should be–affectionate, yet fearless in expressing her views. Loving, yet fiery in aiding the defenseless. A doting mother, a compassionate aunt, a devoted friend,” Romualdez said.

“We all knew that she lived long enough to fight for what she believed was the right thing to do—to build a better country that protects the rights and promotes the welfare of our women, our children, and our less fortunate brothers and sisters,” he added.

Romualdez also called Villarosa a “trailblazer in Philippine legislation” for crafting laws of national significance when she was serving in Congress.

“As the first woman Deputy Speaker in Philippine Congress, she single-handedly supervised the Social Services Cluster composed of twelve standing committees in the 14th Congress. That Cluster produced eight laws of national importance and helped steer into approval on Third Reading 617 equally important measures at the end of their term,” Romualdez said.

Furthermore, Romualdez said Villarosa also steered the enactment into law of vital measures including the Magna Carta for Women, an extension of the Comprehensive Agrarian Reform Law, Access to Cheaper and Quality Medicine, and the Cooperative Code of the Philippines.

“What I consider one of her edifying legacies is her influential role in the passage of the law allowing automated election in the Philippines. That law authorized Comelec to conduct pilot testing of a Computerized Election System in some provinces in 1998, which eventually paved the way for an automated national election in 2010,” Romualdez said.

The late lawmaker’s husband, Jose Villarosa, former mayor of San Jose town in Occidental Mindoro, confirmed in a text message to the Inquirer that the former representative died of an aneurysm while receiving treatment at a hospital in Metro Manila.