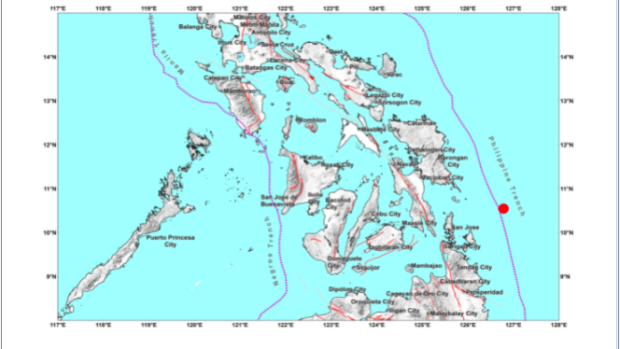 MANILA, Philippines — Two earthquakes struck off the coast of Burgos, Surigao del Norte within minutes of each other Sunday morning, the Philippine Institute of Volcanology and Seismology (Phivolcs) said.

The first earthquake, a magnitude 5.2, was recorded at 10:50 a.m..  Its epicenter was traced offshore 97 kilometers northeast of Burgos.

At 11:20a.m. a 5.8 earthquake struck offshore some 55 kilometers northeast of the same municipality.

State seismologists said that the earthquake was tectonic in origin and had a depth of 10 km.

No damage and aftershocks are expected, according to Phivolcs.

Meanwhile, the earlier quake  was felt at Intensity II in Surigao City and Surigao Del Norte, and Intensity I in Abuyog, Leyte.

The quake was also tectonic in origin and had a depth of 17 km.