Netanyahu, battling for political life, attacks deal to unseat him 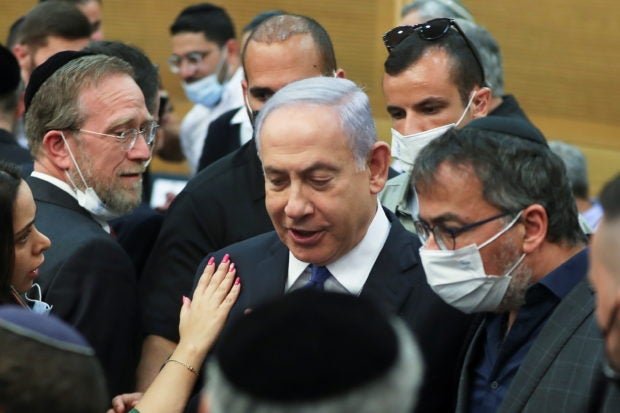 Israeli Prime Minister Benjamin Netanyahu looks on after a special session of the Knesset whereby Israeli lawmakers elected a new president, at the Knesset, Israel’s parliament, in Jerusalem June 2, 2021. (REUTERS)

JERUSALEM  – Israeli Prime Minister Benjamin Netanyahu on Thursday scorned as “dangerous” and “left-wing” a cross-partisan coalition cobbled together by his rivals to unseat him, even as the nationalist named to lead it echoed his hard line on the Palestinians.

Netanyahu, facing the prospect of an end to his 12-year run as premier, mounted the social media attack the day after centrist opposition leader Yair Lapid’s announcement, about 35 minutes before a Wednesday night deadline, that he had succeeded in forming a governing coalition.

Under the deal, nationalist Naftali Bennett, 49, a former defence minister and a high-tech millionaire, would become prime minister and hand over the post to Lapid, 57, a former TV host and finance minister, in about two years.

A parliamentary session, in which the government can be approved by a simple majority, could be up to 12 days away, far-right politician Avigdor Lieberman, a member of the new coalition, said.

With parliament’s Speaker, a Netanyahu loyalist, widely expected to try to ward off any legislative attempts to hold the vote earlier, the prime minister could use the period to try to twist arms.

“All legislators elected by votes from the right must oppose this dangerous left-wing government,” Netanyahu tweeted, in rhetoric aimed at drawing defectors from Bennett’s slate.

Yet Bennett set out positions on Israel’s most immediate foreign and security policy problem – how and if to accommodate Palestinians’ statehood goal – that hewed close to Netanyahu’s.

“The national struggle between Israel and the Palestinians is not over territory. The Palestinians do not recognise our very existence here, and it appears this will be the case for some time,” the prime minister-designate said in an interview.

“My thinking in this context is to shrink the conflict. We will not resolve it. But wherever we can (improve conditions) – more crossing points, more quality of life, more business, more industry – we will do so,” he told Channel 12 TV.

The coalition agreement capped a March 23 election in which neither Netanyahu’s Likud party and its allies nor their opponents won a majority in the legislature. It was Israel’s fourth national ballot in two years.

The governing lineup comprises a patchwork of small and medium-sized parties from across the political spectrum, including for the first time in Israel’s history one that represents its 21% Arab minority – the United Arab List (UAL).

On Twitter, Netanyahu – who once drew accusations of racism by urging his supporters to get out and vote because “Arabs are flocking to the polls in droves” – highlighted the new alliance’s links with UAL leader Mansour Abbas.

Despite the UAL’s pro-Palestinian sympathies, Bennett said his planned government would have a free hand militarily – including in Gaza, where Israel clashed with Hamas last month.

“We’ll do what we’ll do without any political constraint,” he said. “And if at war’s end there’s a coalition, so be it, and if not, we’ll go to elections.”

Netanyahu posted an old video clip of Bennett saying that Abbas “visited terrorist murderers in jail” after a 1992 attack in which Arab citizens of Israel killed three soldiers.

The UAL did not immediately respond to a request for comment.

Members of the prospective government have little in common other than a desire to oust Netanyahu, who is also on trial on corruption charges. He denies any wrongdoing.

Political analysts expect Netanyahu to try to pick off what one described as “low-hanging fruit”, seizing upon Yamina members who are unhappy about joining forces with Arab and leftist lawmakers.

“We launched the move, but we haven’t completed it. There will be 12 days that won’t be easy, and in the end, there will be a government,” Lieberman said on Channel 13 TV.

Netanyahu controls 30 seats in the 120-member Knesset, almost twice as many as Lapid’s Yesh Atid party, and is allied with at least three other religious and nationalist parties.

During his tenure as prime minister, Netanyahu has been a polarising figure at home and abroad. His rivals have cited the criminal charges against him as a main reason why Israel needs a leadership change, arguing that he might use a new term to legislate immunity to shield himself.

A source involved in the coalition talks said the proposed new government would try to retain consensus by avoiding hot-button ideological issues.

“This government will focus mainly on economic issues,” Lieberman said.

Perhaps the most immediate test for a new administration is passing the budget, an issue that has toppled coalitions in the past.

Due to the prolonged political deadlock, Israel is still using a prorated version of a base 2019 budget that was approved in mid-2018. There may be some big budgetary shifts since the government is without ultra-Orthodox Jewish parties that seek state funding for religious institutions.

The new government, if it is sworn in, will face other considerable challenges, including rebuilding the economy after the pandemic. As well as Iran and the moribund peace process with the Palestinians, it also faces a war crimes investigation by the International Criminal Court.