‘Not another 6 years’: Group rises vs possible Duterte dynasty 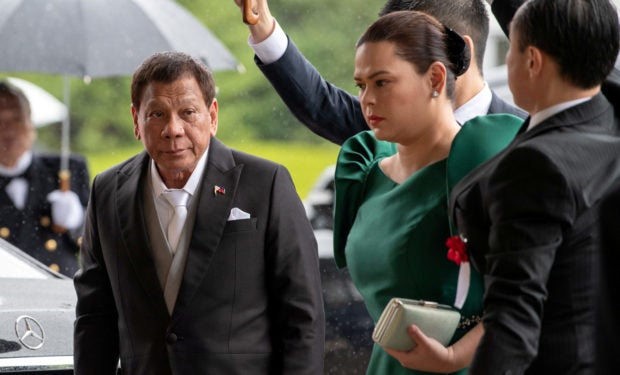 They launched the “Duterte Wakasan Na” movement as a unified front seeking to “end President Duterte’s rule and his legacy of failed and detrimental policies.”

The movement is an offshoot of the “Save the Nation! Duterte Resign!” campaign protesting Mr. Duterte’s response to both the COVID-19 pandemic and China’s incursions in the West Philippine Sea. Several high-profile members, including film director Joel Lamangan, former governor of the now-defunct Autonomous Region in Muslim Mindanao Haroun Lucman and screenwriter Bibeth Orteza, spoke during Thursday’s launch.

Lamangan, who is also one of the conveners of Movement Against Tyranny, said “Duterte Wakasan Na” comprised resistance to a possible Duterte dynasty, which the President once claimed he opposes.

“We need to stop this runaway [deception] of Filipinos,” Lamangan said. “We need to start being good stewards of our country and end this regime.”

The President is considering his daughter Sara, mayor of Davao City, as one of his possible successors although he doesn’t recommend it, according to his spokesperson Harry Roque.

But Albay Rep. Joey Salceda said there was “no doubt” that Sara Duterte would run for President in 2022. He said alliances were now being built to back her bid.

But should he seek and win the vice presidency, the movement is worried that Mr. Duterte might evade accountability, particularly over the thousands of extrajudicial killings in his brutal war on drugs.

“We cannot take another six years of Duterte rule,” said Orteza, whose brother Ephraim died of COVID-19 during last year’s surge. “We are sick and tired.”

“For an entire year there were no clear plans, and they have failed to protect our health-care workers and our Filipinos,” Dela Paz said. “They looked at the pandemic as a public order issue and passed the blame to Filipinos. Mr. Duterte has to resign so we can also get rid of the military generals who know nothing about managing a public health emergency.”

Danilo Ramos, chair of the militant Kilusang Magbubukid ng Pilipinas, called for an end to the Duterte regime: “For the sake of our people, [six years] is enough. Sobra na. Wakasan na ang rehimeng Duterte.”

Roque said that when they talked about the matter, the President “still has not made a decision” and only “mentioned options.”“As of now, the President is likely focused on the pandemic and the vaccines,” he said at a press briefing.

Roque said he heard Mr. Duterte say on Monday, while talking on the phone with a caller, that “Mayor Inday Sara would still not run.”

“He said his recommendation is that she not run. So that’s the latest I heard from the President’s own mouth,” Roque said.

Mayor Duterte is not a member of PDP-Laban. She has her own party, the regional Hugpong ng Pagbabago.

Roque said there was nothing in the Constitution preventing Mr. Duterte from running for vice president, but he denied that this would be done as a means to perpetuate the President’s stay in power.

“Mr. Duterte has no plan to stay in Malacañang beyond his term,” Roque said.

Citing his conversations with Sara Duterte, Salceda said that “in all sincerity, there is no doubt in my mind that she is running.”“It’s a question of announcement,” he told reporters in an online interview, adding that “all of these came from her through chat.”

Salceda said there were at least five political parties forming alliances “to support her candidacy.”

On Viber with the Inquirer on Thursday, Mayor Duterte declined to comment on Salceda’s claim. She has not made a categorical statement on her political plans.

But Salceda said he did not see a Duterte-Duterte team-up in 2022.

“I don’t see that, although I signed the resolution,” he said, referring to the PDP-Laban document urging Mr. Duterte to run for vice president next year.Salceda cited the need for a geographical balance for Sara Duterte to win the presidency.

“It is more reasonable that there will be a Duterte and somebody else as a team. I don’t see a Duterte-Duterte tandem in 2022,” he said.

Could that “somebody else” be former Defense Secretary Gilbert Teodoro?

Teodoro, who ran and lost in the 2010 presidential election, will run as vice president in 2022, according to former Camarines Sur Rep. Rolando Andaya Jr.

Accompanied by his wife Monica and Andaya, Teodoro met with Mayor Duterte on Thursday.

Hours before the meeting, Andaya posted in his Facebook account photos of him with Teodoro in a private plane bound for Davao City, with the caption: “On my way with my Vice President to meet my President. Done deal folks.”

In a phone interview with the Inquirer, Andaya said the meeting between the mayor and Teodoro “ended very well,” with the two discussing the pandemic and their plans for 2022.