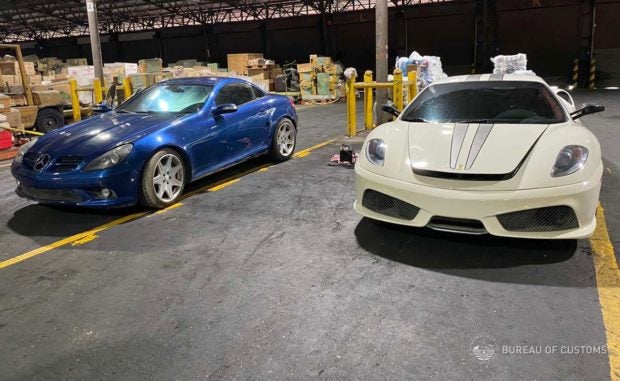 Two of the cars smuggled were (left) a Mercedes Benz SLK 55 AMG and a Ferrari F430 Scuderia. (Photo from the Bureau of Customs)

MANILA, Philippines — The Bureau of Customs (BOC) seized on Wednesday smuggled cars worth P20 million from a consignee implicated in a similar incident a week ago.

The Customs Intelligence and Investigation at the Manila International Container Port discovered the cars covered with 33 bales of used clothing, locally called “ukay-ukay,” the BOC said in a statement issued on Thursday.

They were consigned to JLFDM Consumer Goods Trading, which was reported to be the same consignee of four sports cars intercepted last week.

A warrant of seizure and detention was issued against the shipment for possible violation of Section 1400 of  the Customs Modernization and Tariff Act.