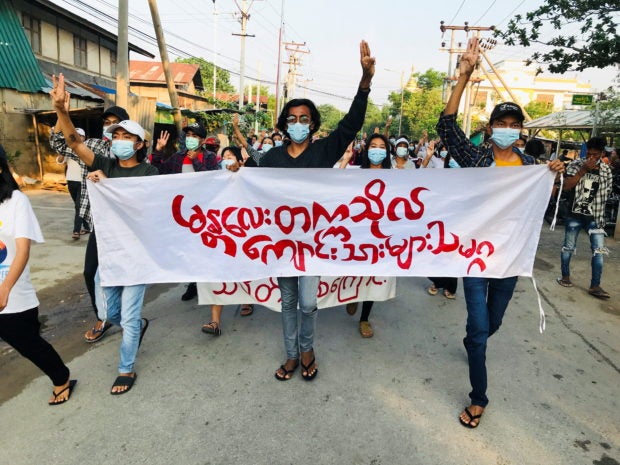 FILE PHOTO: Students hold a banner and flash the three-finger salute as they take part in a protest against Myanmar’s junta, in Mandalay, Myanmar May 10, 2021. REUTERS/Stringer

No more than a quarter of Myanmar’s more than 12 million pupils enrolled for the new school year amid a protest boycott against military rule and in the wake of a series of bombings, an official of a teachers’ group said.

There were noticeably fewer students at many schools in the main city of Yangon as the new academic year began on Tuesday for the first time since both the Feb. 1 coup and the relaxation of curbs imposed last year against the spread of COVID-19.

Security forces stood guard at some schools and brought pupils under armed escort from their homes.

An official of the Myanmar Teachers’ Federation, who sought anonymity for fear of retribution, said that even fewer pupils had turned out than had been enrolled because parents were concerned about security, as well as joining the boycott.

Teachers were also afraid, he said, adding, “Some teachers go to school in normal clothing and change into their uniforms only inside the school.”

Schools have become another battleground for protest against the junta that seized power on Feb. 1, arresting elected leader Aung San Suu Kyi and cutting short a decade of tentative democratic reforms.

Reuters was unable to reach either the junta or its education ministry for comment.

The junta-controlled Global New Light of Myanmar newspaper quoted Win Win Nwe, the headmistress of a school in Yangon’s Kamayut township, as saying that about 30% of pupils had been enrolled there.

“The teachers, security members, and town elders will provide security for the students,” it quoted her as saying.

Teachers and students have been on the front line of anti-junta protests and the teachers’ federation said more than 125,000 teachers, from a total of more than 430,000, had been suspended for joining a civil disobedience movement. 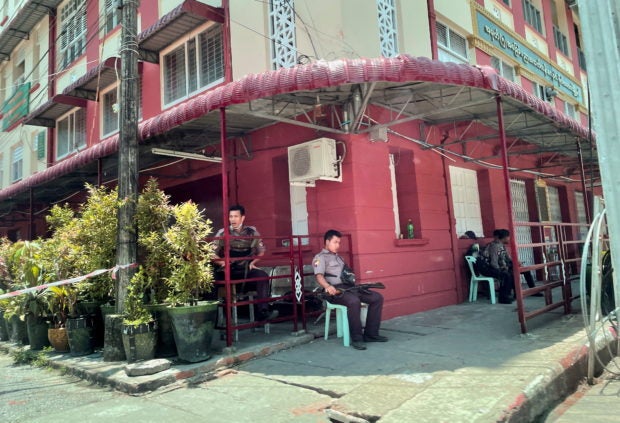 Police officers are seen in front of a school in Yangon, Myanmar June 2, 2021. REUTERS/Stringer

The phrase, “We’re not sending our children to school,” has been trending on social media since mid-May.

One mother, Thinn Thinn Hlaing, posted that her children would not be sent to school, to show sympathy for parents whose children were killed in the protests, as well as to show respect for striking teachers and to resist the system, out of fear of a new wave of coronavirus and because of bombings near schools.

“All mothers, please keep fighting,” posted Su Mon Han, another mother who planned to teach her seven-year-old son at home.

None of the parents Reuters spoke to who were sending children to school was willing to discuss the matter.

The junta complained that “politically extreme terrorist groups, who wish to destroy national interests” had been threatening pupils and teachers to disrupt education.

Between May 1 and May 26, there were 115 bombings or bombing attempts and 18 arson attacks at educational establishments, it said in a statement.

A National Unity Government set up underground by junta opponents has said it is working on a mobile education project, despite tough internet restrictions since the coup.

At least 57 of the 841 people recorded killed by security forces since the coup were under 18, says an activist group, the Assistance Association for Political Prisoners. The army says the total of those killed is much lower.