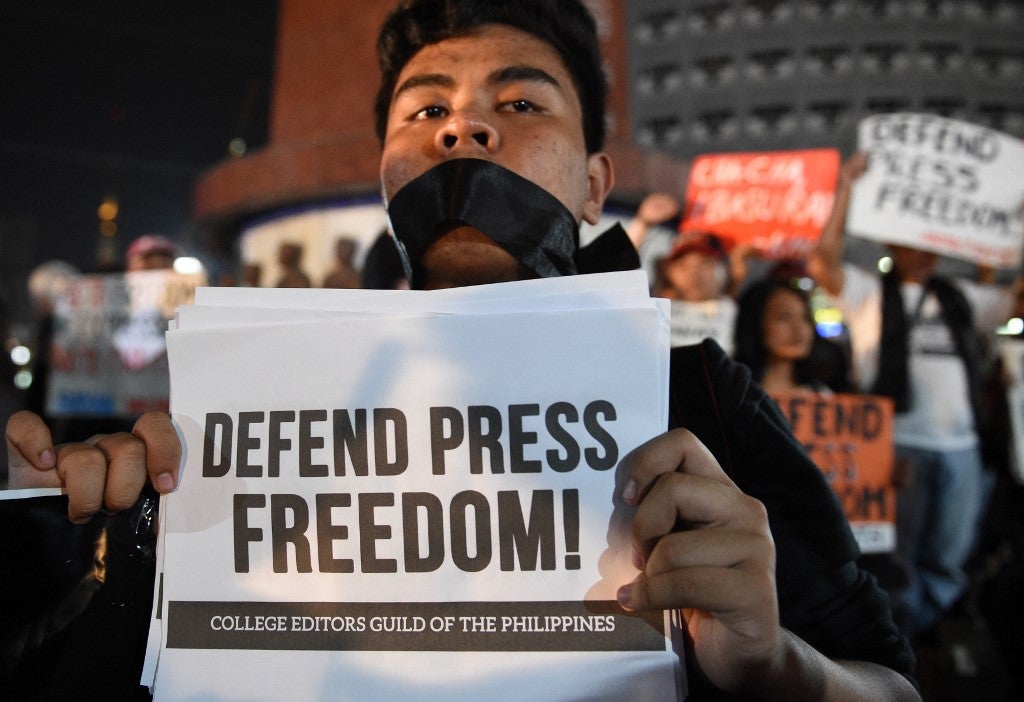 (FILE) A protester displays a placard calling for press freedom during a protest with journalists in Manila on January 19, 2018. – Philippine journalists took to the streets on January 19 in support of a news website facing state-enforced closure, accusing President Rodrigo Duterte of trampling on press freedom. (Photo by TED ALJIBE / AFP)

MANILA, Philippines – The House of Representatives approved Wednesday the bill declaring August 30 of every year as “National Press Freedom Day.”

With 203 affirmative votes, the lower chamber approved House Bill No. 9182 in honor of the birthdate of Marcelo H. del Pilar, the father of Philippine journalism.

“To ensure the meaningful observance and celebration of National Press Freedom Day, all government agencies and instrumentalities, the Armed Forces of the Philippines, Philippine National Police, government-owned and controlled corporations, local government units, as well as the private sector shall afford sufficient time and opportunity for their employees to engage and participate in any related activity to be conducted on the premises of their respective offices or establishments,” the bill states.

The measure likewise directs the Department of Education, the Commission on Higher Education, and the Technical Education and Skills Development Authority in consultation with the Office of the President, government, and private media organizations to lead public and private schools at all levels in organizing consciousness-raising activities on the importance of the press, their rights and social responsibilities, and the elimination of all forms of violence against the press.

In 2020, the Philippines dropped two places in the World Press Freedom Index, sliding to 136th place out of 180 countries and regions.

The annual press freedom list by the Paris-based Reporters Without Borders noted how state troll armies in some countries, including the Philippines, used the weapon of disinformation on social media.

Critics have likewise questioned the state of mass media under President Rodrigo Duterte’s administration, especially after the denial of a franchise of media giant ABS-CBN. Merely months before the network’s shutdown,  Duterte had repeatedly said in his public speeches that he would hinder the renewal of their franchise for not airing his 2016 election advertisement and for alleged biased reporting against him.

Critics of the administration called the denial an attack to press freedom that would have a “chilling effect” on journalists, considering that the network is the country’s largest broadcasting company, providing both news and entertainment programs.

Nonetheless, during the World Press Freedom Day in 2020, Malacañang underscored the crucial role of “a fair and democratic media,” adding that the Philippines “enjoys a free and vibrant press.”