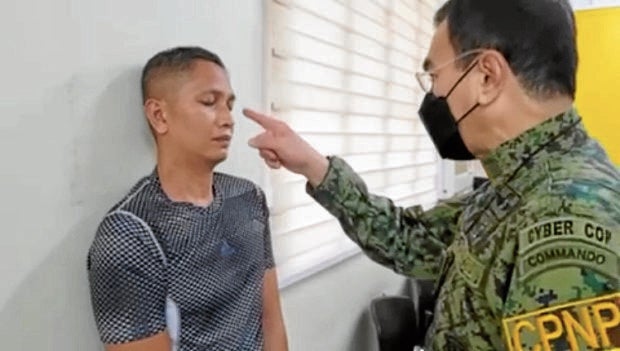 IN YOUR FACE Hours after his murderous fit that was caught on video, PoliceMaster Sgt. Hensie Zinampan is confronted on Tuesday by Philippine National Police chief Guillermo Eleazar, who vowed to personally monitor the criminal and administrative proceedings against the trigger-happy officer. —PNP PHOTO

In a now-viral video taken on Monday night by the woman’s grandson, Police Master Sgt. Hensie Zinampan was seen confronting Lilybeth Valdez who had gone to a “sari-sari” store for some cigarettes. Zinampan, who is assigned to the Police Security and Protection Group, was seen pulling Valdez by the hair and shooting her in the neck before walking away.

Initial investigation revealed that on May 1, Zinampan and Valdez’s son had a drunken fistfight, after which the policeman threatened to harm the family.

“A case of murder will be filed against him, [while an] admin[istrative] case will be initiated so he can be dismissed from service at the soonest possible time,” Eleazar said in a press conference, adding that he would personally monitor the administrative and criminal cases that would be filed against Zinampan.

The Commission on Human Rights (CHR) said it would investigate the brutal killing of Valdez, which came barely six months after the equally brazen shooting of a mother and son in Tarlac province by Police Senior Master Sgt. Jonel Nuezca.

Nuezca shot Sonya Gregorio and her son Frank dead — the killing also caught on video — after a heated argument about the firing of a homemade cannon in December last year. Now dismissed from service, he had entered a plea of “not guilty” before the Paniqui Regional Trial Court in Tarlac, where he is facing charges for double murder.

“This (Zinampan) incident is gravely concerning as we expect our police to ‘serve and protect,’ and not be at the front lines of violating rights, let alone arbitrarily curtailing one’s right to life,” CHR spokesperson Jacqueline de Guia said in a statement on Tuesday.

“At the same time, after a string of recent deaths and killings being attributed to police officers, we urge the PNP to translate commitments of internal cleansing into actual reduction of cases of human rights violations on the ground. One death is one too many,” she added.

Last week, Valenzuela police shot dead 18-year-old Edwin Arnigo, who was diagnosed with autism, during a raid on an illegal cockpit. The police had claimed that Arnigo had tried to grab their gun, but this was disputed by several witnesses.

At the House of Representatives, Bayan Muna Rep. Ferdinand Gaite blamed the “climate of impunity” for the recent cases involving “trigger-happy” policemen.

Gaite also reiterated his call for the immediate deployment of body cameras during police operations, adding that the police should be open to the idea of being disarmed if they do not want to wear body cameras.

“There are countries where, instead of carrying lethal weapons, police are armed with tasers, batons, or the like, to avoid unnecessary deadly confrontations. Stricter training that de-emphasizes the use of lethal force is also necessary, and thorough background checks, review of previous records, [and] extensive psychological test among police recruits,” the party list representative said.

“Quite disturbingly, such incidents indicate a pattern of police-perpetrated attacks against innocent mothers. This is an extreme manifestation of President Duterte’s brand of macho-fascism, which seems to have taken root in the PNP,” Brosas said.

Karapatan secretary general Cristina Palabay said Valdez’s and Arnigo’s deaths “clearly display a governance driven by a kill-kill-kill policy that is fostering an environment of insecurity.”

Palabay added: “What is clear and apparent is that the dangerous mindset of normalizing such killings is deeply ingrained among state forces.”

—With reportS from Arianne Suarez and Julie M. Aurelio