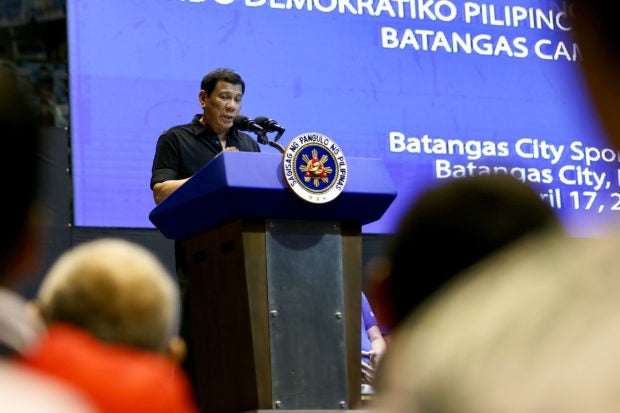 MANILA, Philippines — An official of the Partido Demokratiko Pilipino-Lakas ng Bayan (PDP-Laban) criticized two other officials of the party, saying they should “cease and desist from pursuing and implementing their baseless, divisive, and unauthorized quasi-secret plan.”

“[T]o protect the best interest of the PDP Laban and not to cause further friction and intrigue within the party, it is best that the Vice Chairman and the Deputy National Secretary General both cease and desist from pursuing and implementing their baseless, divisive, and unauthorized quasi-secret plan,” PDP-Laban executive director Ronwald Munsayac said in a statement.

Munsayac did not mention any names but the vice-chairman of PDP-Laban is Energy Secretary Alfonso Cusi and the party’s deputy secretary general is Melvin Matibag.

Munsayac insisted that the national council assembly held in Cebu Monday afternoon was a violation of party rules.

“Although a political party should be happy if its members are actively involved in party matters, still there must be some order in the observance of party activities… Otherwise, the party will be pulled in different directions simultaneously and will explode like a supernova star and cease to exist. The true party members and ideologues do not want this to happen,” he said.

According to Munsayac, it would be better for all party members to wait for the party chairman and president “to jointly act on the matter of calling for a National Council Meeting.”

“Many times, haste makes waste! And also, let us all still be conscious that we are still under a health emergency and pandemic,” he said.

Malacañang, however, later on said it was party chairman President Rodrigo Duterte himself who directed Cusi to convene the national assembly.

But Munsayac maintained that the vice-chairman “cannot call for a meeting of the National Council, since only the real Chairman can.”

He said that the notice for the May 31 meeting was signed by the vice-chairman and the deputy national secretary general.

“However, under Section 6 of the same Article, it should be the Secretary General who should serve written notice of National Council Meetings. Worse, the irregular and unauthorized Notice contained an agenda for the said purported ‘National Council Meeting’ which agenda was not fixed in coordination with the President of the party. This is another direct violation of the PDP Laban Constitutional provision found in Article XVI, Section 4,” he claimed.

“It is good that the Vice Chairman in his letter and the Deputy National Secretary General in his Notice both took the effort to cite some basis for their actions. This only means that these people are stickler for rules. However, they have misread the rules to suit their plan,” he further said.