'We are suffering': Congo volcano spells misery for Rwanda too | Inquirer News 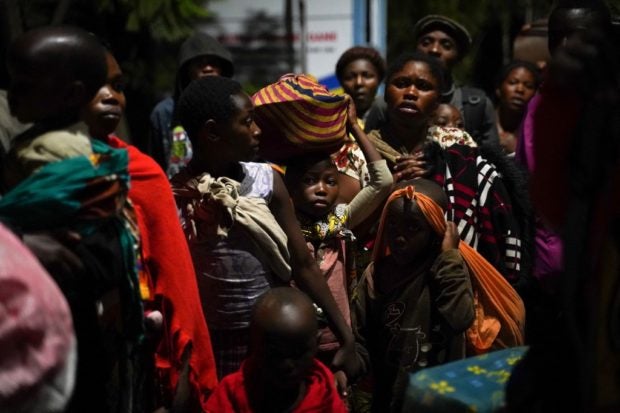 Congolese people carry their belongings as they flee from Goma, Democratic Republic of Congo (DRC), after the Nyiragongo volcano erupted, at the border point known as “Petite Barriere” in Gisenyi, Rwanda, on May 23, 2021. Photo by Simon Wohlfahrt / AFP

GISENYI, Rwanda — Two days after Mount Nyiragongo erupted, out of the volcano’s direct path Hadidja Dusengimana felt a powerful tremor and a sound “like a landmine” rippling through her home in Gisenyi.

“We were sleeping and the house started to shake… Then I heard a boom. We ran out of the house and saw the damage,” said Dusengimana, surveying the deep fissure running from the courtyard to her living room, where sunlight now peeps through cracked walls.

Gisenyi, on Rwanda’s northwestern frontier, is separated by an international border from Goma, the eastern Congolese city in the shadow of Nyiragongo, and most at its mercy.

They have endured the immediate terror in recent days as Africa’s most active volcano has spewed lava but those in Gisenyi — about 20 kilometers from the crater — have not been spared its wrath.

Violent tremors in the aftermath of the May 22 eruption have damaged houses, ripped up roads and cracked water pipes in the city.

Businesses are shut, while the city’s hospital services had to be relocated. Some 1,800 homes have been affected and nearly 340 completed flattened, the city municipality says.

To compound the pressure,thousandsof refugees from Goma have poured into the city on the shores of Lake Kivu, fearing Nyiragongo could blow again, all in need of emergency shelter and assistance.

The Dusengimana family, who live just a few hundred metres from the DR Congo border, have been sleeping in the courtyard of their home for a week, sharing the space with chickens and a pig.

“We’re going to sell him, because we can’t live like this,” said Dusengimana, a 40-year-old farmer and mother of eight.

“We’ve organized the yard so that everyone can sleep. In the morning, we light a fire, and in the evening we take out the mattresses to sleep.

“But we are devoured by mosquitoes,” she said, gesturing to her face pocked with bites.

She does not know when her lot will change, with cash in low supply and little help to rebuild her shattered home.

“With help, I could rent somewhere else and escape the mosquitoes, but since I have no money, I’ll have to sleep outside and wait to see what happens,” she said.

A neighbor, who declined to be named, confessed to being so worried she couldn’t eat.

“We worry so much about our house,” she said of her earthquake-damaged dwelling, “we can’t fix it.”

The damage is worse than even during Nyiragongo’s last major eruption, a disaster in 2002 that covered the eastern part of Goma in lava and claimed more than 100 lives.

“We had nothing then, no earthquakes,” said Kabaya Seratiyeri, a man in his 80s. “This was so powerful it scared us.”

‘God will help us’

Rwanda has extended assistance to Congolese refugees escaping the volcano’s path, setting up tents and clinics and assisting those unable to return home.

But those in Gisenyi affected by the disaster say help has been slow coming.

“The Congolese are coming, and they have help. If they get help, we should get help too. If not, God will help us,” said Dusengimana.

Her neighbor said: “We are asking for help, our children are suffering.”

“They came on Monday to take stock of the damage and register us, but we haven’t heard anything since,” she added.

Deogratias Nzabonimpa, the deputy mayor of Gisenyi in charge of economic development, said the refugees were in dire need and assisted as a point of priority.

“They were the first to be served so that they did not lack the means to survive,” he told AFP.

“Now that we have finished with the orientation of the various refugees from Congo, we are proceeding with the Rwandans who have been affected. We hope that within two or three days, everything will be up and running,” he said.

On Sunday morning, at a makeshift camp that just a day earlier housed Congolese evacuees, Rwandans in need gathered for handouts of food, soap, and blankets.