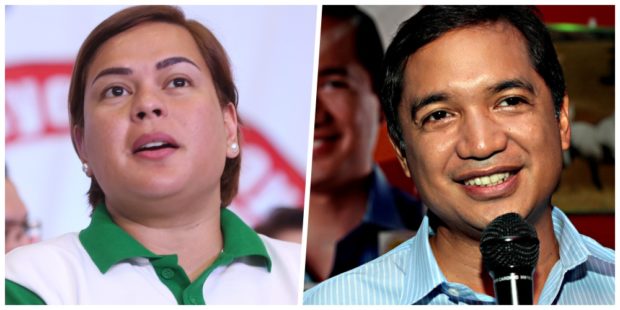 MANILA, Philippines — Are barangays being used for a survey to seek out support for the possible presidential bid of Davao City Mayor Sara Duterte-Carpio?

Former Bayan Muna Rep. Teddy Casiño raised this issue on Twitter after sharing a photo of a supposed letter that a barangay chair had sent a Bulacan homeowners’ association about a survey to determine if there was enough voter support for President Duterte’s daughter.

The May 27 letter, signed by Mark Anthony Velasquez, barangay chair, was addressed to the homeowners’ association of Camella Phase 1 and 2 in Barangay Pagala, Baliwag, Bulacan.

The letter instructed village officials to determine how many people support “the continuity of the advocacy of our President Rodrigo Duterte’s movement,” based on a survey form allegedly circulated at the behest of local officials. Now being shared over social media, the form stipulates that the respondents were willing to back Mayor Duterte’s presidential candidacy.

I see what you did there. Wonder how many barangays in the country are conducting this “survey.” pic.twitter.com/awrYys5OvJ

The former party list lawmaker wondered if the same survey was being done in other barangays. “I see what you did there. Wonder how many barangays in the country are conducting this ‘survey,’” Casiño tweeted.

Guiguinto Mayor Ambrosio Cruz Jr., president of the League of Municipalities of the Philippines (LMP) in Bulacan, would not say if the group had initiated the survey, but said that during an LMP meeting on Friday, the Bulacan mayors joined a movement launched in Davao earlier to push Mayor Duterte to seek the presidency.

According to the letter, the Sangguniang Barangay of Pagala received the forms from the municipality of Baliwag. Casiño’s photograph of the letter showed a heading that read: “Ipagpatuloy Ang Nasimulang Pagbabago ni Pangulong Duter­te Movement.” Below it are spaces for names, contact numbers and signatures.

“Almost all mayors are supporting the candidacy of Mayor Sara and there is now an ongoing signature campaign for her to run,” Cruz said. “It would be a waste to lose the gains made by President Duterte. No one can match his war on drugs, his war against the dumb, the arrogant and the corrupt. It is true a lot more needs to be done but if he will no longer be president, businessmen would remain fearful (for the country’s safety),” the LMP Bulacan president said.

“This is still a good administration and Inday Sara will give us a better government. She is more subdued but she is disciplined and has empathy for the public,” Cruz added.

Although details about the “survey” have not yet been released, it has sparked discussions among Duterte supporters in Bulacan.

Luigi Reyes, a 30-year-old businessman who describes himself as a Sara supporter, said he had yet to receive the form but would readily endorse the Davao mayor “because I don’t want a return of the Aquinos.”

Reyes added: “Also I am progovernment. I have high hopes (that Sara can) even surpass the dedication and service of her father,” he said.

The younger Duterte has not intended to seek the presidency, with a report in April quoting her saying that she has decided not to run for the post. Despite that avowal, several groups have been putting up posters and tarpaulins urging her to seek the top executive post.

In 2015, President Duterte had repeatedly protested that he was not running for President, only to take over the slot of Martin Diño, a Pasay City mayoral candidate of the PDP-Laban party, later in the year. Diño was widely seen as Duterte’s “placeholder” in the 2016 national elections. INQ