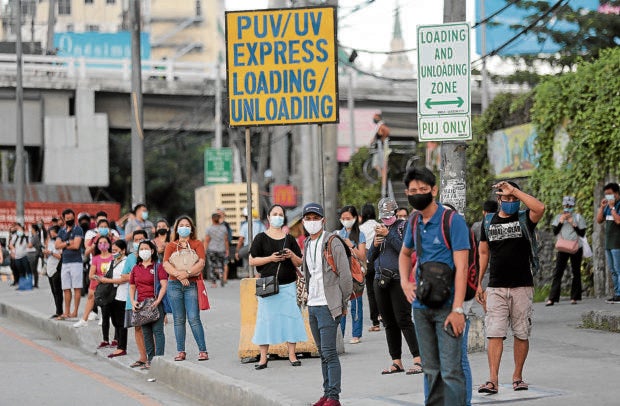 MANILA, Philippines — The COVID-19 pandemic not only worsened the shortage in public transport but also made it harder for Filipino workers to go to work as transport prices shot up, according to a study by transport policy researchers.

In their paper, titled “The Systemic Shortage in Philippine Public Transportation,” the researchers found that road transport cost inflation in the National Capital Region has increased by 19 percent by the end of 2020, using recent data from the Philippine Statistics Authority.

The bottom 30 percent of Filipino households in terms of income had it much worse, as they were hit by a 24-percent increase in road passenger transport prices within the same period.

This figure also complements the data from the Japan International Cooperation Agency that the low-income household in the Philippines spends at least 20 percent of its monthly income on transport.

The study, presented to the public during the “Biyahenihan” research forum last Wednesday, was written by transport and mobility researchers Katreena Chang, Kenneth Isaiah Ibasco Abante, Patricia Mariano, John Sevilla, Robert Siy Jr. and Jedd Carlo Ugay of the Move As One Coalition.

In their paper, the researchers said this road transport inflation was another evidence of the public transport shortage in Metro Manila, as commuters experienced overcrowding and long lines for public utility vehicles.

The study also noted that according to a recent survey by the Social Weather Stations, 70 percent of nonhome-based adult workers found it harder to get to work now than in the prepandemic period. 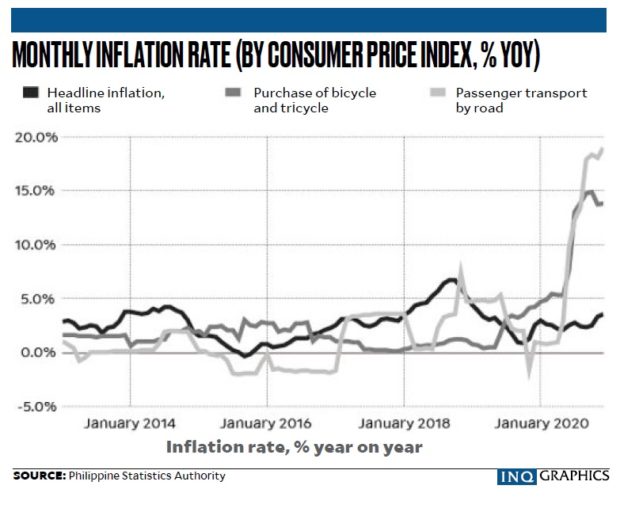 The same survey revealed that walking is still the most common means of going to work for adults with nonhome-based jobs at 44 percent, followed by motorcycle at 24 percent, tricycle at 14 percent and jeepneys or multicabs at 8 percent.

“It is worth reviewing and comparing the cost of each transport mode per person-kilometer, which reveals that bus rapid transit, cycling and pedestrian infrastructure are very cost-efficient transport modes,” the researchers noted in their paper.

“Based on the investment plans for the public transport infrastructure flagship projects, the cost to build a subway is P5.94 per person-kilometer traveled, P3.33 for overground railways and just P0.61 for bus rapid transit,” they noted.

Aside from building a BRT system, the researchers also recommended investing in active transport infrastructure, “which requires even less spending.”

“A bike lane only costs 8 centavos to build per person-kilometer traveled, and a sidewalk less than 1 centavo (1.32 percent and 0.14 percent of the cost to build a subway, respectively),” the researchers said.

Because “it is evident that the Philippines is already facing a massive transport shortage” made worse by the “poor mobility response to the COVID-19 pandemic,” the researchers concluded that the “massive gap in public transport capacity” will continue over the next 10 years if the current situation continues.

“We recommend a rebalancing in the country’s infrastructure pipeline through greater investment in active transport infrastructure that promote walking and cycling, and a massive expansion in road-based public transport modes through public utility vehicle service contracting, bus rapid transit programs, safer and pedestrian-­friendly transit stops and other complementary infrastructure,” the researchers said.